“ Domelia” village – demographic change and destruction of houses, a civilian was killed by torture, another fell from a building, arbitrary arrests, and the extermination of a forest

In a systematic hostile framework against the Kurds and their region – drawn by Ankara government – the militias of the so-called “Syrian National Army” of the opposition Syrian-Brotherhood coalition operate with full powers on the ground, violating and committing various crimes, among which we mention the following:

It belongs to Raju district and is 12 km away from it, and it consists of about 250 houses, and there were about /1300/ original inhabitants of the Kurds, all of whom were displaced during the aggression on the village, and about /130 families = 350 people/ returned from them, while the rest were forcibly displaced outside the area, and about /200 families = 1000 people/ from the recruiters have been resettled there.

As a result of the bombing of the village /50 houses/ were unevenly damaged, including the house of Bahri Muhammad Salman, which was badly damaged, and seven of his sheep died along with its young lambs.

Later, the village remained under the control of the militia of the “112th Brigade”, which took the house of “Jamil Iji” and turned it to its military headquarters, and stole a transformer, the public electricity network cables, the landline telephone cable, and all the contents of the seized houses; One of its leaders, Osama Rahhal, also seized the building of an olive press belonging to the citizen, Habash Habash Battal.

It seized also / 15,000 / olive trees from the property of the families of “Suleiman, Maho, Kno, Azazek, Qadam, Mamiya, Abdeh”, and imposed various fees on the seasons of the remaining olive and sumac fields in the hands of the villagers.

This militia also unjustly cut down thousands of olive trees and natural forest trees in the mountain overlooking the village, in addition to a perennial symbolic coniferous tree for the purpose of firewood and trade, in addition to the overgrazing of livestock between olive fields and agricultural lands.

Those who remained in the village were subjected to various types of violations, including killing, kidnapping, arbitrary arrests, torture, insults, material extortion and others. Dozens, including women, were kidnapped and arrested on charges of having ties with the former Autonomous Administration, and there were those who were forcibly disappeared 2-3 years and whose bones were broken under Torture, as the citizen “Ahmed Mahmoud Hamo – from the Egji family/ 35 years old” has been arrested since late March 2018 and forcibly disappeared, and his fate is still unknown.

On December 12, 2019, Hay’at Tahrir al-Sham (formerly al-Nusra) in Idlib executed the young man, “Muhammad Bakr Muhammad (his grandfather Hussein Bakr), 21 years old” by shooting him in the head a year after he was handed over to it by Turkey as he was residing in it; On 10/13/2021 CE, the citizen “Neamat Bahjat Sheikho, 33”, the wife of the citizen “Khalil Naasan Musa”, died after her health deteriorated as a result of arrest and beatings by the militias of the “Military Police in Afrin” on 10/11/2021AD.

In mid-January 2022 AD, after the citizen “Rizan Muhammad Khalil / 42 years old” from the village of “Jaqaleh Fawqani” – Shiye / Sheikh Al-Hadid, who was residing in Al-Zaydiyah neighborhood in Afrin city, visited the headquarters of the “Ahrar Al-Sharqiya” militia, to inquire about the fate of His young nephew “Azad Ismat Khalil”, who is detained by her because of his demand to return his seized house, was tortured and beaten with the soles of the weapon on his head, his health condition worsened and he was treated to a military hospital and then to a hospital in Turkey, but he died on 1/2/2022 AD as a result of a brain hemorrhage, without the authorities taking investigative and judicial measures about the crime.

= A young man was killed by a fall from a building:

On Friday afternoon, 4/2/2022 AD, the young man “Mahmoud Muhammad Jamo / 27 years” fell from a building in the Old Bazaar Street in the city of Afrin, which led to his death while being treated in a Turkish hospital, where his body was taken in the evening to his village “Ashkan Sharqi” – Jenderes, to be buried in its cemetery.

It is reported that the young man was staying with his family in their house on Jenderes Street in Afrin, and prior to the incident he was working in his shop under the house when his brother went to lunch, but he was absent from the shop before his brother returned, and it is likely that he was subjected to a murder, especially since a while ago he was exposed to a verbal altercation with a number of young men from the recruiters, and it was noted that his jacket was torn after the accident, according to a private source.

– On 30/1/2022 AD, the citizen “Adnan Arabo / 72 years old, from the people of Jenderes, was arrested by the Military Police on charges of having ties with the former Autonomous Administration, and his fate is still unknown, knowing that he was arrested on a previous occasion on the same charge.”

By comparing two photos of an artificial forest in the eighties of the twentieth century, southeast of the village of “Umaro” – Shara / Sharan, taken in (November 2017 AD before the occupation, September 2019 AD after the occupation) by Google Earth, we clearly notice the extent of the extensive cutting of the forest.; Especially since the cutting has been going on since September 2019 AD until now, and the forest has been exterminated.

On the morning of Sunday 30/1/2022 AD, the car of Khalil Othman Bakr, head of the Raju local council, was detonated with an explosive device in front of his house in Raju town, seriously injuring his son.

Covering up the crimes committed by the militias against the people of Afrin and impunity is usual, so no one sees any difficulty or deterrent in doing what he wants from thefts, seizing people’s property, looting, kidnapping, torture, killing and others.

– Destroyed houses in the village of “Domelia” – Raju.

– Two pictures of a forest southeast of the village of “Omra” – Shara / Sharran (November 2017 AD before the occupation, September 2019 AD after the occupation), Google Earth. 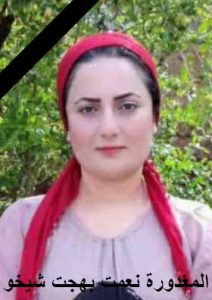 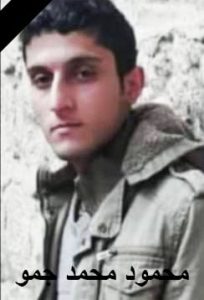 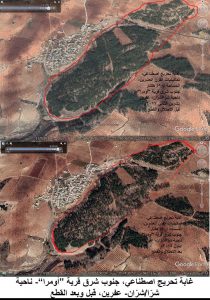 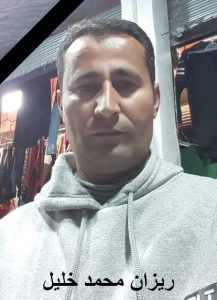 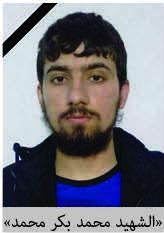 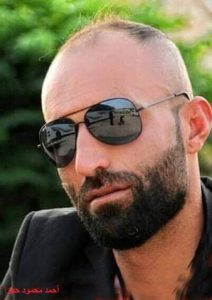