The village of “Ma’araskeh”, the bombing of Afrin and the deaths of victims, the cutting of the “Qutmeh and Kafar Janneh” forests, arbitrary arrests

With the fourth anniversary of the Turkish aggression on the Afrin region on January 20, 2018, the demands of its people were renewed to end the occupation and the presence of mercenaries in it, and to return it to Syrian sovereignty and management, while scenes of killing and destruction returned to their city once again, especially as the occupation authorities continue to violate and commit crimes by various means and tools in the shadow of a suspicious international silence.

The following are facts about the violations and crimes committed:

As about /50 family = 300 people/ from the recruiters were resettled in the houses that were seized, and / 15 families = 100 people/ in the tents near the village.

The village is controlled by the Levantine Front militia, and during its invasion of the village, it stole all the contents of the houses, including supplies, copper utensils, tools and electrical equipment, and others, before the return of some of the people, and it also stole: /6/ electric generating sets, and /10/ agricultural tractors and their accessories belonging to “Wafiq Tobal, Joan.” Tobal, Issam Tobal, Abdel Qader Othman, Ibrahim Hajj Youssef, Jaco Othman, Abdel Qader Othman Khalil, Munir Muhammad Amin, Muhammad Ezzat, Khalil Ezzat, Mustafa Ahmed Osso, Ezzat Adel, and also /4/ cars for “Mustafa Ahmed Osso, Farouk Ahmed” Oso, Taj Al-Din Khalil, Ahmed Youssef.

It seized about 10,000 olive trees belonging to “Mohammed Tobal Abu Mamdouh, Abdel Karim Aref, Adnan Aref, Waheeb Mohamed Ali and his brothers, Kamal Khalil, Jako Othman, Issam Tobal, Mohamed Sobhi Tobal, Munir Mohamed Ali and his brothers, Murad Tobal’s children.” , Izzat Tobal, Mahmoud Sami”, not to mention the royalties that it imposed on the olive and other seasons and the thefts that affected them.

The remaining residents of the village were subjected to various types of violations, including kidnapping, arbitrary arrests, material extortion, insults and others.

Dozens of them were kidnapped and arrested, accompanied by torture, including women and minors.

They were forced to pay ransoms and huge financial fines until they were released by the occupation authorities and the militias loyal to them.

The fate of the citizen “Ahmed Khalil son of Abdul Hanan / 40 years” has been unknown since he was arrested/ kidnapped more than a year ago.

The militia cut down forest trees at the “Ain al-Jabal” site and destroyed the tomb of the late “Mohammed Tobal Abu Mamdouh”.

– On 17/1/2022 AD, the militias of the “Military Police in Bulbul” arrested the citizen “Hassan Muhammad Bayram / 58 years” from the village of “Kela”, on charges of participating in the night watch during the former Autonomous Administration, and took him to Afrin, to be released on 20/1/2022 AD.

– On Thursday afternoon, January 20, 2022 AD, a jeep was detonated in the town of “Maryamin” – Afrin with an explosive device, killing a woman and wounding others with varying degrees of injuries.

– Thursday afternoon, 20/1/2022 AD, coinciding with the occasion of the Turkish aggression on Afrin in 2018, the city of Afrin was bombed with four rockets from the side of the areas under the control of the Syrian army, which hit the city center (Azadi Square Street, Raju Street), causing of killing six civilians and wounded twenty-four – according to the “Civil Defense in Afrin”, including women and children, as three of the area’s residents (Muhammad Maarouf Ibrahim / 26 years of the Arab component, Muhammad Nashaat Ibrahim 55 years old – a village “Hajj Bilal,” Johnny Adnan Mansour (17 years old, “Shorba” village), and it caused also material damage to homes, shops and cars.

– On the same day, the Turkish army and its militias bombed the areas of al-Shahba and Laylon mountain- north of Aleppo, the villages of (Uqibeh, Soganakeh, al-Ziyara, and the vicinity of Deir Jammal, Kafar Anton, Shawargha…) and others, in conjunction with the demonstrations of thousands of displaced people from Afrin, demanding an end to the Turkish occupation, which caused material damage to some houses and injured a girl in the village of “Uqibeh”.

Referring to photos taken by Google Earth of Shara/Sharran-Afrin, before and after its occupation:

With a simple comparison, we note the extent of the extensive cuts to which the two forests (Qetmeh ≈ /200/ hectares, Kafar Janneh ≈ /45/ha) which were planted by artificial afforestation in the eighties of the last century, as well as the uprooting of hundreds of olive trees aged about 15 years and an area of about 6 hectares due to the establishment of a Turkish military base on a hill between the villages of “Kafar Janneh” and “Matina”.

The indiscriminate bombing of the city of Afrin, as well as the bombing of villages and towns north of Aleppo – crowded with Afrin’s displaced people, and targeting homes and civilians, are reprehensible war crimes.

– A damaged house in the village of “Ma’araskeh” – Afrin.

– Forest and the location of a military base north of the village of Kafar Janneh (November 2017, October 2020), Google Earth. 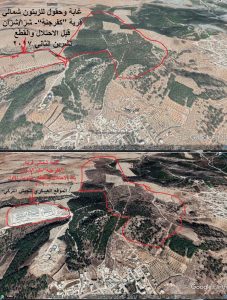 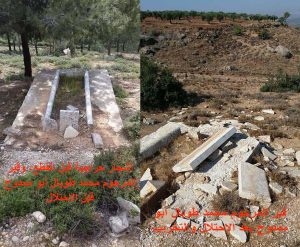 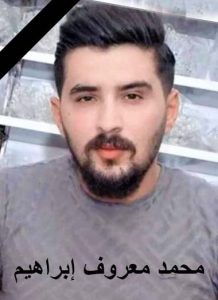 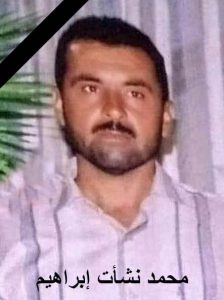 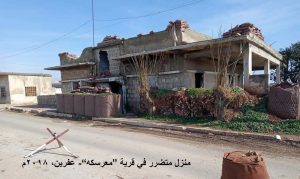 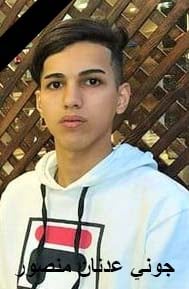