The series of arbitrary arrests by the occupation authorities does not end, on charges of the relationship with the former Autonomous Administration, which has been absent for nearly four years, whether those charges were military, civil, voluntary and service, or night watch and others, where Turkish intelligence leads the campaign through its local tools ( Police, courts, militias, a network of agents…) and a personal database is prepared on detainees, including women and the elderly, in addition to thousands of cases of kidnapping and forced detention by militias; About /500 – an estimated number – / detainee/abducted/ from the sons of Afrin is still forcibly hidden, and the file of the notorious al-Ra’i prison has not yet been closed, and there is fear for the lives of some of them.

The following are documented violations and crimes:

remained there, and / 13 families = 80 people / from the recruiters were resettled there.

During the aggression on the area, two houses belonging to “Akeed Rashid Akeed, and Youssef Abdo Akeed” were completely destroyed and /15/ houses were partially damaged, and many civilians of the village fell as martyrs.

The village is controlled by the “Al-Muntasir Billah” militia, and they have stolen all the contents of the seized houses, including supplies, copper utensils, electrical tools and equipment, etc., a car for “Salah Shukri Atna”, an electric generating set for “Bilal Aref Habash”, a transformer and cables for the general electricity network, the militias also impose large royalties on the olive seasons.

Those remaining in the village were subjected to various types of violations, including kidnapping, arbitrary arrests, financial extortion, and others.

– About five weeks ago, the citizen “Joan Zuhair Hajj Rashid / 34 years old” from the village of “Alamdara” – Raju, who was residing in the city of Afrin, but he decided to return to his village to regain his house and property, so he went to the militia command center.” Faylaq al-Sham” in the town of “Maydan Akbis”, which controls his village; But they arrested him on charges of affiliation with the former Autonomous Administration, and subjected him to severe torture, and handed him over to the police in Raju, to be later transferred to Marateh prison in Afrin.

– On 31/12/2021 AD, the elderly Arif Muhammad son of Sheikh Muhammad / 70 years old, from the village of “Alamdara” – Raju, was arrested by the police in the Shara / Sharran district center, against the background of an armed case against him by the militias of the “Shamiya Front”, those who defrauded him and fingerprinted him on financial trust bonds worth 52,000 dollars while signing papers for the gunman who impersonated a “lawyer” to represent him when they filed a lawsuit against him in “Azaz Court” on behalf of a family from the recruiters who lived with him in a house – villa – belonging to his absent brother in the village of “Kafar janah”, and they set fire to his warehouse in response to their expulsion from the house.

– On 2/1/2022 AD, the citizen “Ismat Ahmed Abdo,” 25 years old, a father of two children, from the town of “Ba`adina” – Raju district, accused of having ties to the former Autonomous Administration, is still under arbitrary detention.

– On 6/1/2022 AD, the citizens “Jihad Sadiq Barakat, 30 years old, Khabat Muhammad Habash, 30 years old, and Muhammad Subhi Hamo, 28 years old,” were arrested by the Military Police in Jenderes, on charges of affiliation with the former Autonomous Administration, where “Jihad, Khabat” was released after two days and a fine of 5000 Turkish liras was imposed on each of them, while the third was transferred to Afrin and is still under arbitrary detention, knowing that he was arrested on a previous occasion.

– On 11/1/2022 AD, the citizens “Abidin Prem / 42 / Mohammed Omar / 43 / years old” from the village of “Ma`amala” – Raju, accused of participating in the night watch during the former Autonomous Administration.

– On 12/1/2022 AD, the citizen “Khairiya Muhammad Musa / 40 years old” from the town of “Ba`adina” – Raju, and they took her to Afrin, on the pretext that her forcibly displaced husband, “Ahmed Alo”, had a relationship with the former Autonomous Administration, and they threatened her to seize his property If he does not return to Afrin and surrender himself.

= The life of a kidnapped detainee is in danger:

The “Al-Sham Legion” militia has been forcibly detaining the citizen “Hassan Shukri Seido / 36 / years old” from the village of “Iska” – Sherawa since 11/16/2018 AD in its own prison in the building of a “poultry farm” the late Farouk Izzat Mustafa in the village, under an open martial verdict, without a trial or an appointment of a lawyer, and with refusing his family’s request to hand him over to the “Police and Public Prosecution Office in Afrin”, as he suffers from many diseases, including kidney disease, as he recently suffered from a blood clot and was treated to a hospital in Afrin and was returned to prison; as a result of oppression and grief over him, his elderly father suffered a stroke a week ago, and he fell into a deplorable state.

By comparing images from Google Earth, before and after the occupation, of two forests east of the village of “Sinka” – Shara/Sharran district, which are from the artificial afforestation carried out by the state in the eighties of the last century:

It is clear how extensive cut the two forests were subjected to on the hands of militias and recruiters affiliated with them for the purpose of woodcutting and trade, which rises to the level of environmental extermination.

– As a result of the pressure he is receiving, and in an attempt to circumvent calls to “hold him accountable” by the “Azm Chamber and members of the Committee for the Restitution of Rights – the Syrian National Army,” to deny scandals affecting him, and to conceal violations and crimes he committed against the people of the region… The so-called “Muhammad Al-Jassem Abu” Amsha, the leader of the militia of the “Sultan Suleiman Shah Division”, dismissed his two brothers from their responsibilities in the division and handed them over, along with other members, to the “Shari’a Arbitration Board”.

It was announced that Ali Sinno, a Kurd from the village of Musaku / Raju, and the leader of the “National Gathering of Afrin Free People” had been assigned to receive complaints, and the latter had actually returned some oil tanks to their owners in the town of Shiye / Sheikh Al-Hadid; It is reported that “Sino” has a Brotherhood background and is loyal to “Erdogan and Turkey” and is accredited by the Turkish intelligence, and he is an undisclosed partner of “Abu Amsha” in some projects and he strongly defends him against “the sheikhs of Azm and the Committee”, and he had sent a committee from his side – late November 2021 AD – to the town of “Sheikh al-Hadid” and some of its villages, to announce “Abu Amsha’s good behavior and that the district is free of violations”!

Local opposition media reported today that “Abu Amsha” sought the help of “Hay’at Tahrir al-Sham”, so military reinforcements entered from it to Sheikh al-Hadid, and for its part, the militia forces of the “Syrian Front” and its allies mobilized in Afrin against al-Amshat, while there is a counter-mobilization from other militias.

– As a result of the bullying of three minors of the recruits’ sons against the minor “Mohammed Khaled Hamo / 14 / year old” from the town of “Kafar Safra”, and one of them hurled insults against the Kurds and “Hamo” responded to him, on 01/10/2022 AD, three-armed militia members The “Samarkand Brigade” beat “Hamo” severely, inflicting bruises and bruises, and injuring his testicles.

– On 12/1/2022 AD, the so-called “Absi al-Hamad-Abbas”, one of the leaders of the “112th Brigade” militia, severely beat the citizen “Khalil Abdo Jaafar” in his shop (sanitary ware and hardware) in the town of “Ba`adina” because he refused to sell on credit to one of his members. Due to the many cases of non-payment of debts by militants and recruits.

– On Thursday evening, 13/1/2022 AD, a suicide bomber blew himself up with an explosive belt near the Kawa roundabout in the city of Afrin, killing him and wounding three other people, according to the “Civil Defense in Afrin”.

The international community, human rights and civil organizations, and America and Russia in particular, are called upon to put pressure on the Ankara government, to work to end the arbitrary detention file in Afrin and to release detainees and those forcibly disappeared on the basis of political accusations or the relationship with the former Autonomous Administration, and urgently release those whose lives in danger.

– Destroyed houses in the village of “Habo” Hebo- Mabata/Maabatli.

– Two photos of a first woodland forest east of the village of “Sinka”-Sharran, before and after cutting, Google Earth.

– Two photos of a second forested forest east of the village of “Sinka” – Sharran, before and after the cut, Google Earth. 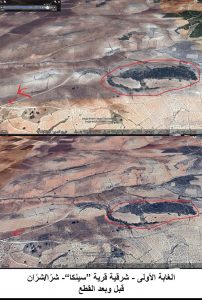 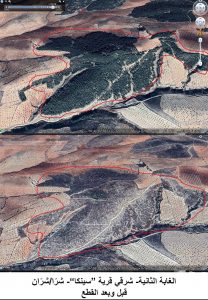 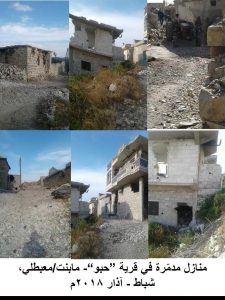