The town of “Qastal Miqdad” – great displacement and destruction, the spoiled “Abu Amsha” and the terrifying ruler, arrests and cutting of trees, removal of the “Newroz” monument and its roundabout

It is no secret to anyone that the political cover and legal reference enjoyed by “Muhammad Al-Jassem – Abu Amsha” and the rest of the militia leaders, to the extent that he is not afraid neither of the scandals that haunt him, nor the reports which reveals his corruption and crimes he committed, as he silences mouths and terrifies people so that no citizen – whose rights have been violated – dares to talk about them, or file a complaint against him.

Here are some of the violations and crimes:

It belongs to Bulbul sub-district and is /5/ km away from its center, and it consists of about /500/ houses, and there were about / 3500 / original inhabitants of the Kurds, all of whom were displaced during the Turkish aggression on the area, only (30 families = 150 people) of them returned, and about (850 families = 5000 people) from the recruiters were resettled there and about (500 people) in tents in the vicinity of the village most of them from the countryside of Hama and Homs.

The town is controlled by the militias of the “Al-Hamzat Division” led by the so-called “Abu Kasser” in the town, they made its military headquarters in the houses of the children of “Dotan Sharqani”, as well as the militias of the “Sultan Murad Division” led by the so-called “Abu al-Nour” in the town, they took the house of “Arif Mukhtar Kasho” as a military headquarters.

During the war and before the return of the people, the militias stole all the contents of homes, shops, warehouses and workshops, including foodstuffs, supplies, tools, copper utensils, gas cylinders, photovoltaic equipment, workshop machines, spare parts, etc., all cables and poles of the public electricity networks and the landline, and four agricultural tractors belonging to the following citizens: “Faisal Mekdad, Nuri Muhammad Sher, Jamal Sheikho, Walid Ahmed Shukri”, as well as a pickup car for “Mustafa Kik”, and an excavator with a trailer and a tractor-trailer for “Kamal Maamo Muhammad”, and about fifty motorcycles, and a large electric generating set (amperes) with a complete network for “Hanif Suleiman”.

The militias controlling the town did not allow some of the residents to return to their homes, so they were forced so far to reside in the city of Afrin, some of them were known: Khalil Hanoush and Hanif Hanoush.

The town was bustling with commercial, industrial and agricultural activity, but it was subjected to great destruction during the war, because of the Turkish bombing, seven houses were completely destroyed, belonging to the citizens: “Mohammed Turkah, Abdo Shukri Ma’mo, Bahjat Sadiq Haider, Sheikho Akanli, Nuri Akanli (it was composed of two floors completely),” Omar Muhammed with his shop, and Mustafa Kajali”.

And 17 homes were partially destroyed belonging to the citizens: “Rasheed Sheikh Rashid with an automated bakery building and all his machines were stolen, Muhammad Jamil Sano, Karo Jabra, Barazi Abu Jawan with a hardware store, Nuri Najjar with his shop, Abu Farzat, Ali Manan Miqdad, Roshan Hannoush Suleiman, Khalil Hannoush Suleiman, Kamal Mamo Muhammad, Ismail Miqdad, Aras Hassan Sheikho, Shukri Shaitan, Hassan Miqdad, Hassan Qassem, Malik Hamza, Khalil Ali Karo”, in addition to the complete destruction of three presses with the theft of all their machines belonging to “Hanif Kalo Abu Sheikho from Shekhorze, Daoud Hanan Abu Ahmed and his associates, Jamil Khoja-Qurta”, and also the theft of the machines of the “Diane Topel” olive press and the seizure of its building.

The town’s mosque was also bombed and later removed and a new mosque was built in its place.

The remaining residents were also subjected to various types of violations, from kidnapping and arbitrary arrests accompanied by torture, insults and material extortion, including “the teacher Mohamed Hassan Hassan, 55 years old, who was kidnapped/arrested since late 2018 and his fate is still unknown,” and “Aras Hassan Sheikho” spent two years and half in prison, and “Hamadoush Hassan Sheikho” spent three months in prison, and “Nabi Hamza, Shaaban Habash, Kawa Alouk” who spent two and a half years in prison, to name a few, as well as the murder of the late Muhammad Hanif Rashid Ahmed (Zankel’s family) (54 years old) from the village of Qurneh, owner of an olive press in “Qastal Miqdad” at noon on December 8, 2018, when he was randomly exposed to several bullets fired by a gunman in the olive press yard.

The Turkish army and militia removed a large part of the shops, houses and workshop halls of the main street with bulldozers and excavators – they were partially destroyed and can be restored and repaired – but, nevertheless, they were completely removed in order to change the features of the town and seize its lands, stealing iron bars and stones extracted from its ruins, as well as from the destroyed olive press buildings, in addition to changing the historical name of the town to “Selcuk Basi” in the context of the systematic demographic change that affected it; Here are the names of the owners of economic activities (shops, sewing and embroidery workshops, restaurants, agricultural machinery maintenance shops, auto mechanics … etc.) that were removed:

– Muhammad Amin Horo (three shops with a basement and a two-storey building).

– Kamal Mamo Muhammad (basement and two shops, one of them is a pharmacy and the other is for mobiles).

– Kamal and Rizan (two shops with a basement, tractor mechanics).

– Mustafa Shilahat (two shops with a basement and a house).

– Mustafa Khayat (a shop with a basement for the sale of electric car kits).

– Hamza Khalil Clou (two butcher shops with a basement and a house).

– Luqman Horik Habo (a shops with basement and house).

– Mohamed Haftaro (two shops with a basement and a house).

– Jamal Ma’mo Muhammad (a blacksmith’s shop with a basement and a house).

– Nabi Najjar (three furniture carpentry shops with a basement and a two-storey building).

– Sheikh Ali Sammak (a shop with a house).

– Roshan Hannoush Suleiman (a hairdressing shop with a warehouse).

– Ibrahim Yaqoub Kakaj (three shops for the manufacture of water tanks with a house).

The militias unjustly cut down thousands of olive trees and others for the purpose of firewood and trade, including /95/ olive trees and /8/ perennial almond trees belonging to “Mohammed Sheikh Zainal”.

The recruits who own herds of livestock are grazing them unfairly within the olive fields and agricultural lands, without anyone being able to deter them or daring to complain against them, because they are supported by the armed men.

Under the supervision of the Turkish intelligence, it excavated the archaeological site of Tell Qastal with heavy machinery in search of treasures and buried antiquities and stole them.

There is an active religious movement in the town, between lessons, religious gatherings, and an institute for memorizing the Qur’an.

In the center of the town were four bodies of martyred Kurdish fighters. The Turkish army and militias did not allow the people to bury them after their return, so they remained in the open for a long time until the occupation forces buried them in an unknown place.

= “Abu Amsha,” the governor of the town of “Shiye/Sheikh Al-Hadid”:

Stories continue about the so-called “Muhammad Al-Jassem Abu Amsha”, the spoiled man of Ankara and the Syrian-Brotherhood coalition, who has received more than one official visit, and the leader of the “Sultan Suleiman Shah Division” militia, in the field of violations and crimes, from: Leading mercenary groups in battles in Libya under the supervision of Turkish intelligence, and the theft of part of their salaries, to the rape of the wives of some of its members, and the practice of various crimes against the town of Shiye / Sheikh Al-Hadid – located 45 km west of Afrin – and the villages belonging to it and its people, and not least the scandals of his obtaining a high school diploma – the scientific branch of the “Local Council in Afrin” and his registration in the “Faculty of Law at Free Aleppo University – Azaz”.

As part of its work to beautify the image of the occupation by returning some rights to their owners from the people of the region – which does not constitute anything of the scale of violations and crimes- The major crimes committed – The Grievances Committee visited the town of Shih and its villages and made sure that Abu Amsha imposed fees (25% on oil production, 4 dollars on each tree of absentee property, 50% of the property production of PYD members). According to a sort determined by him – upon returning to the records of olive presses and without being able to obtain a single testimony from the people who are terrified of his punishment, with the owner of the livelihood paying the price of empty tin cans and limiting the sale of oil to the representative of “Abu Amsha” in the district.

The outcome of the committee’s attempts was to return a few hundred oil tin cans to their owners, which Abu Amsha agents quickly retrieved from the homes, and on the evening of Wednesday 24/11/2021 AD, its members attacked the mourning tent of the late “Amina, the wife of Kamal Ali Bakr” in the town , and attacked the audience with insults, and took the cell phones from them, and kidnapped citizens: “The two brothers Massoud and Abdul Rahman the children of Mustafa Sheikho, Khalil Mustafa Sheikho, Ammar Suleiman Sheikho, Bakr Mustafa Rahmoki” and severely tortured them, where she released “Masoud and Bakr” and the fate of the rest is still pending. unknown.

– On November 22, 2021 AD, the citizen “Nuri Qadour bin Ziyad / 61 years old” from the village of “Afrazeh”, Mabata / Ma’batli, was arrested by the district police, on charges of having a relationship with the former Autonomous Administration (an employee who monitors the irrigation water line), He was taken to Afrin and released by the court on 25/11/2021 AD after imposing a fine on him.

– On November 22, 2021 AD, the occupation authorities released the citizen “Rania Khalil” from the village of “Qejomeh” – Jenderes, from Marateh prison after an arbitrary arrest and an unfair sentence that lasted for two and a half years, on charges of affiliation with the former Autonomous Administration, and he was with her child in prison. baby girl.

– On November 24, 2021 AD, in the context of chaos and disorder, groups of the “Military Police” and “Al-Jabha al-Shamiya” militias attacked a military headquarters for a group of remnants of the “Sultan Suleiman Shah Division – Al-Amshat” in the city of Jenderes, which led to an exchange of fire and the arrest of the so-called “Abu Rasha” – its leader, promoter and drug dealer, according to local opposition media.

-The militias of the “Al-Sham Legion” located in the town of Maydanki recently unjustly cut down hundreds of olive trees for the purpose of firewood and trade, which belong to the three brothers “Ismat forcibly displaced and has /3/ thousand trees seized, Fawzi is in the village, the late Ramzi – his widow is present in the village -The sons of Seydou Shekho from the village of “Hassan Dera” – Bulbul.

– The occupation authorities recently removed the “Newroz” monument and its roundabout in the city of Afrin, whose symbolic panels were replaced during the invasion of the city in March 2018 AD with the flags of “Turkey and the Revolution” and its name was changed to “Salah al-Din al-Ayyubi” roundabout, and at that time the “national” roundabout, a roundabout and a statue of Kawa Al-Haddad were also destroyed in the center of the city, in the context of fighting the culture of the Kurds and their national human heritage.

Exposing and revailing the violations and crimes committed in Afrin is a humanitarian, national and human rights mission that serves the issues of peace, freedom and justice, on the way to ending the Turkish occupation and the presence of mercenaries and terrorism.

– A group of destroyed houses in the town of “Qastal Miqdad” – Bulbul.

– A picture of a street in the town of “Qastal Miqdad” – Bulbul, before and after the occupation. 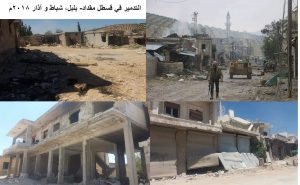 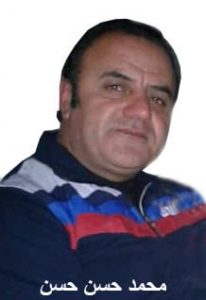 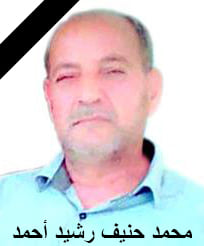