The town of “Kakhre”, a woman loses her mind after a year and two months of detention, arbitrary arrests and citizens forcibly disappeared for three years, chaos and fighting.

Except for the kidnapping and random arrests carried out by the pro-Ankara “Syrian National Army” militias against the people of Afrin for more than three and a half years, Turkish intelligence directly supervises the implementation of arbitrary arrests – even if they are repeated against the same person – through its tools from the moot courts and the “civil police” and the military” that it established in the region after its occupation, even if it was for the slightest reasons for the relationship with the former Autonomous Administration, the defense of Kurdish issues, or trumped-up charges, It also creates a personal database of detainees and sentences them to prison terms and fines, and even transfers some of them to Turkey.

It had forcibly disappeared about two thousand citizens for long periods, and the fate of hundreds of them is still unknown, while many of those released suffer from health problems and painful consequences for their social lives.

The following are systematic violations and crimes:

It belongs to the district of Mabata / Maabatli and is /10 km/ away from its center, and it consists of about /400/ houses, and there were about /2,200/ original Kurdish inhabitants, only /125 families = 400 people/ remained after the forced displacement of the majority, and the settlement of / 225 families = 1200 people/ from the recruiters in it.

During the war, and as a result of the bombing, a number of houses were partially damaged, and there were martyrs and wounded among civilians, including the two martyrs “Joan Sadeq Izzat Rashid / 42 years old on 2/3/2018 AD, Asaad Izzat Abdeen Mustafa / 54 years old on 6/3/ 2018 AD, where they were buried in the “Martyr Avista” cemetery – Kafar Shileh in Afrin, whose landmarks were removed after the occupation of the city.

During the invasion of the town, the militia of the “Sultan Suleiman Shah Division” led by the so-called “Muhammad Al-Jassem Abu Amsha” seized about /260/ houses with all their furniture and contents, and stole from other houses some copper utensils, tools, electrical equipment, gas cylinders, and others, in addition to the contents of the primary and middle schools and the equipment and contents of the medical point of the Red Crescent (dispensary, dental and gynecological clinic, general medicine, laboratory and pharmacy) were also stolen to become out of service, and /4/ cars for “Mohamed Osu son of Mohamed, Salah Hajji son of Mustafa, Mustafa Hasso Bass, Fahmi Abbou son of Ali”, and /6/ agricultural tractors for “Farzat Zino son of Manan, Ali Hasso son of Hassan, Abdul Karim Qassem son of Aref, Khalil Abdi son of Abdin, Walid Abdi son of Abdeen, Muhammad Khoja son of Hassan”, and Internet Center equipment for “Mazen Imo son of Mahmoud”, a large electric generating set (amperes) belonging to the people of the town, and /4/ household electric generating sets for “Ali Sheikho Abbo, Sheikh Muhammad Abbo, Bahjat Abdi son of Abdin, Idris Ali Abbo”, and a harvester for “Ahmed Suleiman Muhammad,” and all the machines of the olive press belonging to “Faeq Mustafa Mustafa,” with a large sum of money stolen from him on a false promise to return them, and all the machines of the olive press and a truck car belonging to “Abdo Khalil Hasso,” and the seizure of the buildings of the two olive presses, a transformer, and the public electricity network cables, cables and contents of the network, the optical access unit for the landline phone, a section of the wooden poles, the equipment of the Syriatel communications tower, and all household water meters were stolen, as the drinking water network stopped working and is secured by tanks.

The militia almost completely cut down all of the natural forests of the mountains of “Esau, Ishka, Fatou, Ibeke, Na’su, Kara, Rashok, Hanan Imo, Hajji, and Hera”, in addition to thousands of olive and fruit trees which were cut down unfairly for the purpose of firewood and trade; In addition to the overgrazing of livestock between the agricultural fields, causing great damage to them.

The Turkish army uprooted about two thousand olive trees in the “Sirta” site, south of the town, with the aim of establishing a military base for it.

The militias also dug and excavated two years ago the archaeological site of “Bira Tel”, to search for and stole buried finds and treasures, and it also vandalized the graves of the town, whose tombstones are written in the Kurdish language.

The remaining residents of the town were subjected to various types of violations and crimes, including killing, kidnapping and arbitrary arrests, accompanied by severe torture, insults, material extortion and other things. The fate of “Riyad Aref Jabo / 45 / year, Ismail Abdo Mohamed / 22 / year” of detainees who have been forcibly disappeared since April 2018 is still unknown; The militias of “Suleiman Shah” kidnapped the citizen “Abdo Aref Ibrahim / 33 / years old” in April 2018 AD and killed him under torture without handing over his body to his family, and on the pretext of burning two cars returning to it at night in the town, on Wednesday morning 27/1/2021 AD, it encircled and besieged the town, deployed its members there extensively, and raided homes, terrorizing civilians, and arbitrarily arrested 16 citizens, and transferred them to the Shiye/Sheikh al-Hadid district center, so they were subjected to severe torture that made some of them bedridden, where they were released after days.

= A woman loses her mind after arrest:

In a video report, the Zaman Al-Wasl website published on 10/26/2021 a video clip about the case of a woman named “Zalikha”, stating that for three months she has been living on the roof of a building in the city of Afrin, sick and suffering from hysteria and has no one to take care of her, and she eats from the leftovers thrown in trash; She needs to be housed and treated, as she was leading a normal life before.

After follow-up and according to several local sources, it was found that the displaced woman is Zalikha Walid Omar / 30 years old, from the village of “Rûta” – Mabata / Maabatli. She was residing in the Ashrafieh neighborhood in the city of Afrin and was arrested on June 7, 2020 with the family of her husband (Othman). Majid Naasan, 65 years old, his wife Zainab Abdo, 60 years old, and their children, Jankin, 32 years old, and his wife “Zalikha” with her daughter, Sheyar, 30 years old, Muhammad, 28 years old, and his wife, Jilan Hamalo, with her infant child) on trumped-up charges, and they are from the same village, where “Zeinab” was released in mid-July from Marateh prison – Afrin, and she suffers from a severe head disease and in a difficult health condition, while “Zalikha and Jilan” remain in that prison, and the four men are forcibly hidden and of unknown fate.

Zalikha was suffering from epilepsy before the arrest, and her health condition deteriorated in prison due to torture and harsh conditions in detention; She was released in mid-August, after she lost her mind, and became homeless and a breadwinner and in a deplorable condition, especially since the militias of the “Military Police in Afrin” had seized the family’s homes in the Ashrafieh neighborhood, including their contents, during the arrest of all its members; It is reported that the fate of the girl “Zalikha” is also unknown.

– Approximately forty days ago, the citizen “Hevin Ahmed, 36 years old”, and a week later, the citizen “Jihan Muhammad Ali Qara Heso, 35 years old”, both of the residents of the village of “Atmana” – Raju, were arrested by the “civil police” on charges The relationship with the former Autonomous Administration (teaching the Kurdish language and working in an electoral center), and they took them to Marateh prison in Afrin, where Jihan was released ten days ago after being fined 1,500 Turkish liras, and Hevin is still in arbitrary detention.

– On 3/11/2021 AD, the citizen “Khabat Muslim Bakr, 35 years old”, from the village of “Kusa” – Raju, was arrested by the “Military Police patrol in Marea”, on charges of having ties with the former Autonomous Administration, and he is still under enforced detention. As the intervention of the Marea Police in the affairs of another region is another evidence of the coordination of the matter by the Turkish intelligence and its direct supervision of the arbitrary arrests of the citizens of Afrin.

– On 7/11/2021 AD, the citizen “Mustafa Adnan Sheikh Sadiq / 35 years old”, a father of two children, from the village of “Marateh” – Afrin, was working on a public taxi in Saba, while he was passing on the Afrin-Maydanki Road, and his fate is still unknown.

– The “Police – Political Security in Afrin” with the “Al-Sham Legion” militia, on the night of 3-4/11/2021 AD, raided the village of “Iska” – Sherawa, with heavily armed cars, and arrested six citizens, including an elderly woman, and informed the families of other wanted persons by surrendering themselves, or else their parents and siblings would be arrested, they were forced to appear for arrest after three days, and they are “Muhammad Hassan Ibo / 34 years old, Muhammad Ali Bako / 27 years old, Nabo Ali Alo / 25 years old, and Hassan Sami Bazo / 23 / years old”, and Abdo Ahmed Alo, 49 years old, was arrested by the “Turendeh” armed checkpoint; All are still in forced detention in Afrin center. It should be noted that the name “Adnan Omar Ibo” was incorrectly mentioned in our previous report, and that the number of detainees was /15/.

The “Al-Sham Legion” militia has been forcibly detaining the citizen “Hassan Shukri Sido / 36 / year old” from the people of “Iska” since 11/16/2018 AD in her private prison in the poultry farm building of the “Late Farouk Ezzat Mustafa” in the village, without trial or the appointment of a lawyer.

He suffers from kidney disease and recently contracted coronavirus in prison, and his life is in danger.

– On November 8, 2021 AD, as a result of the dispute over the scope of influence and looting, clashes took place with various weapons between the remnants of the “Al-Ghab Brigade” militia led by the so-called “Alaa Junaid” and a group of “Al-Hamzat Division” militias in the village of “Chulaqa” – Jenderes, followed by clashes between the two sides on the western highway and near the headquarters of “Al-Hamzat” in the “formerly Asayish” building – Horsh Al-Mahmoudia in the city of Afrin, it caused a state of panic among civilians, and opposition local media published pictures of the so-called “Mahmoud Al-Ahmad” as being a member of the “Ghab” and killed by “Al-Hamzat” members under severe torture. Clashes between the two sides renewed on Thursday 11/11/2021 AD near the entrance to Jenderes of Afrin city.

– On November 10, 2021 AD, in the Mahmudiya neighborhood of Afrin, a group of “Ahrar al-Sharqiya” gunmen attacked an elderly man from “Al-Rastan” – Homs in front of his family members, due to a dispute over a house that had been seized, and the matter led to a tense situation in the neighborhood between the militias Rastan applicants.

– On Thursday evening, 11/11/2021 AD, clashes occurred between two groups of the “Al-Sham Legion” militia inside the town of Maydanki – Shara / Sharran, due to a dispute over the stolen goods, which caused a state of fear among civilians.

– In confirmation of the continuous attacks on forests, the “Civil Defense in Afrin” reported that its teams, on Friday 12/11/2021 AD, put out a fire that broke out in a forest in the town of “Kafar Safra” – Jenderes, with an area of ​​one dunum.

The tragic issues of Afrin detainees, especially for women, require greater attention by the media, human rights and civil organizations, and specific United Nations institutions, an active role for influential international forces, and a serious effort to pressure Turkey to end it and stop its violations against human rights.

– Excavation of the archaeological site of “Bira Tel” – the town of “Kakhre” – Mabata / Maabatli, winter 2020. 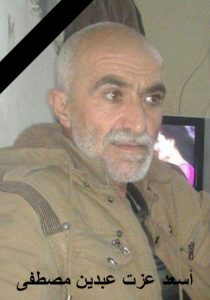 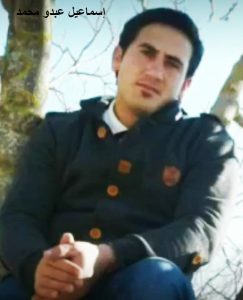 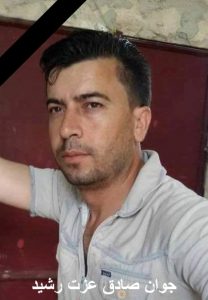 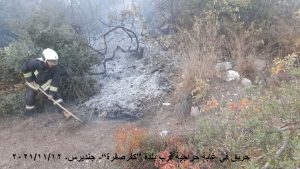 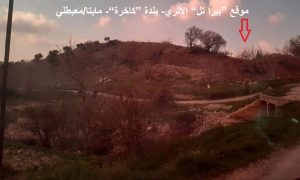 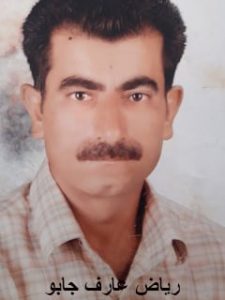 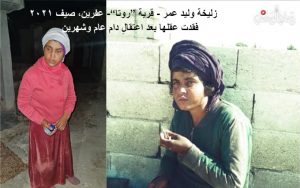 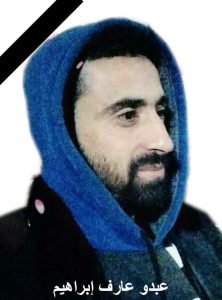