The villages of “Qantareh and Hajjamala” under occupation, the opening of a settlement village, kidnappings and arrests, clashes between militias and forest fires

Despite the chaos and disorder situation prevailing in the occupied region of Afrin, and the continuation of punishments and general corruption, the scheme of demographic change supervised by Turkey is proceeding at a regular pace, as it was recently announced the inauguration of the “Kuwait Al-Rahma” model settlement village, and work continues on the construction of the village of “Basma” south of the village “Shadireh” – Sherawa, and others.

The following are facts of the violations and crimes committed:

It belongs to the Mabata district / Maabatli and is /500/ m away from its center, and it consists of /200/ houses, and there were a thousand original Kurdish residents, all of them were displaced during the Turkish aggression, and only /40 families = 200 people/ returned from them, and about /150 families = 800 people/ from the recruiters were resettled there, most of whom are from Ghouta and Rastan.

By bombing during the war and as a result of the explosion of landmines, six houses belonging to the citizens “Sheikho Ibo Shasho, Manan Aref, Muhammad Husayn Haider, Ahmad Hajiko, Muhammad Kifu, Muhammad Osseh” were completely destroyed, and the two houses of “Ayoub Haider, Muhammad Omar Ali” were partially damaged.

The militia stole most of the contents of the houses before the return of some of the residents, including supplies, copper and glass utensils, tools, gas cylinders, electric power supplies, etc., and a section of the public electricity and landline telephone network cables, and an electric generating set (amperes) belonging to “Mohammed Omar Ali”; also the cars: (Kia Rio taxi for “Ali Muhammad Murad”, Saba taxi for “Mustafa Youssef”, taxi for “Nizar Muhammad Youssef”) were stolen after they left them in the city of Afrin during the recent displacement.

The militia seizes most of the properties of the forcibly displaced, including for “Mohamed Hassan, Amin Jallo the sons of Ibish, 3000 olive trees for the late Brigadier General Manan Ali”, and imposes 10-15% on the production of the remaining citizens’ seasons, in addition to the long-running thefts of seasons of: olives, grapes, sumac and others, in addition to the overgrazing of sheep by shepherds supported by the armed men, as well as the unjust cutting of /60/ olive trees belonging to the late Manan Ali.

As a result of the bombing of the village on 24/2/2018, the child “Ibrahim Rashid Rasho /5/ years” was martyred, his brother “Hussain Rashid Rasho /9/ years” and his father were injured, after the family was displaced from the village of “Chulaqa” – Jenderes to “Qantareh”.

Among the villagers, the following were martyred:

The remaining residents of the village were also subjected to various types of violations, including kidnapping and arbitrary arrest against most of them, accompanied by insults, torture and material extortion, some of them more than once, as the young man “Runak Ibish son of Muhammad Fattah / 28 years” is still forcibly hidden in Al-Ra’i prison and his fate is unknown since April 30, 2018 AD; On 28/8/2018, a masked armed group raided the house of the late lawyer Daoud Omar – the deputy head of the local council of the town of Mabata at the time – and severely beat him and his wife Amina and his sister Sultana, and he was subsequently transferred to a hospital in Afrin for treatment.

The Islamic hill and shrine of Barbaoush “Berbeʼûş”, located between the town of “Mabata” and the villages of “Qantareh and Araba”, was subjected to excavation, digging and sabotage with heavy machinery in search of antiquities and treasures to steal them, which led eventually to the settlement of the hill almost completely.

It belongs to Raju district and is /6/ km away from its center in the north, and it consists of approximately /80/ houses, in which there were about /250/ original inhabitants of the Kurds, everyone was displaced during the aggression against it, and only /35 families = 90 people/ returned, and the rest were forcibly displaced, and about /100 families = 600 people/ from the recruiters were resettled there.

During the aggression, the house of Haider Qarmo was partially destroyed by shelling.

It seized the homes of all the absentees, as well as the olive press belonging to “Ismail Bilal” and stole all its machines, in addition to kidnapping and torturing him and throwing him next to his house on the verge of death, which forced him to flee with his family to the Kurdistan region of Iraq after he recovered relatively, but his two brothers ” Ali and Muhammad” were arrested two days after he left.

As a result of the bombing of Avrîn Hospital on February 13, 2018, shrapnel from the shells hit a taxi parked in front of it, the driver, Radwan Hussein son of Muhammad, born in 1985, from the village, was martyred, and the citizen “Abdo Ali Hassan” was also missing while performing his duty to defend the area, and his fate is still unknown.

= Opening of a model settlement village:

On August 30, 2021 AD, the model settlement ” Kuwait Al-Rahma ” village was opened, near the village of ” Khalta ” – Sherawa in Mount Lilon, located 10 km east of the city of Afrin, which was built by the “Sham Al-Khair Association – Turkey” It includes / 380 / residential apartments, a mosque, a school, a clinic, an institute for memorizing the Qur’an and a commercial market, in order to settle the recruits and enable them to own property, in order to consolidate the reality of demographic change in the region; Where the start of the project was announced by the ” Local Council in Afrin ” on 17/4/2021 AD; While that small village of ” Khalta ” was almost completely destroyed by aerial bombardment by the Turkish army on 31/1/2018 AD, its residents were forcibly displaced and prevented from returning to it.

= Kidnapping, arbitrary arrests, and the release of forcibly disappeared persons:

– On Sunday evening, August 29, 2021 AD, the militia of the “Sultan Malikshah Division” and its leader in the Shara / Sharran district, called “Abu Shaman”, kidnapped the citizen “Mohammed Bahri Muhammad / 43 / years old” from the village of “Kobalako”, and took him to its headquarters in the “Hamadoush” olive press building at the junction of the village of “Khirabe Shara”, and he was subjected to torture, on the pretext that a pickup car in his possession belonged to the Democratic Union Party (PYD), and the car was confiscated the next day, and “Muhammad” is still under enforced detention.

– On Monday evening, August 30, 2021 AD, the militias of the “Al-Waqqas Brigade” raided the homes of citizens “Azad Kamal Hassan / 32 / years old, Aref Muhammad Shukri / 32 / years old” in the village of “Anqaleh” – Shiye / Sheikh Al Hadid, and took them to its headquarters in the neighboring village “Marwanyeh”, to release them the next day after torturing them, in the context of tightening its control over the village, whose residents have repeatedly complained about its practices with other parties.

– On 08/24/2021 AD, the 35-year-old citizen, Faeq Abdo Mustafa Qara, from the village of “Afrazeh”-Mabata/Maabatli, after returning with his family from the city of Aleppo -the destination of his displacement- and he was taken to Afrin center, and on the same day he was arrested His brother Mohieldin and released him hours later.

-Late last month, Jalal Abdullah Ibrahim, 38 years old, from the village of Aboudan – Bulbul, was arrested by the Military Police, several days after he returned with his family from the city of Aleppo -the point of his displacement- and he paid a royalty of about two thousand dollars to the militias controlling the village, under the pretext of regularizing his situation, released him after five days of imprisonment.

– On August 31, 2021 AD, the lawyer “Manan Ahmed Bayram / 42 years old” from the village of “Kela” – Bulbul, was arrested by the “military police” in the town of Raju, on charges of having a relationship with the former Autonomous Administration, and he was transferred to the city of Afrin.

– On 30/8/2021 AD, citizens “Luqman Rashid Bakr / 45 years old, Shaker Hassan Jaafar / 27 years old, Muhammad Zakaria Muhammad (Jaro) / 25 years old, and Muhammad Manan Ibish / 45 years old” from the town of “Baadina” by the “Raju Military Police”, where the latter was released the next day after paying a fine, and the rest are still in detention.

The citizens, “Muhammad Rashid Othman, Luqman Abdul Rahman Haider” from the same town, were also fined /1,500/ Turkish lira each, by the “Prosecutor’s Judge in Raju” without their detention.

– Mustafa Habib Sido, from the village of Gauandu-Maidana-Raju, on August 31, 2021 AD, who was arrested three and a half years ago.

– “Mahmoud Osu” from the village of “Khalnereh” – Afrin, several days ago, who was arrested nearly three years ago.

– Starting on August 28, 2021, and within days, the militias of “Special Forces – Al-Sham Legion” and its leader in the village of “Burj Abdalo” – Sherawa called Abdo Othman, who comes from the village of Kafar Halab – the western countryside of Aleppo, imposed a royalty of 100 dollars on each Yezidi family, where there are /50/ families currently in the village, along with Muslim families, including poor families.

Three roads leading to the orchards and agricultural fields in the vicinity of the village are still closed with earthen mounds by these militias, since August 17, 2021 AD, in order to blackmail the residents and force them to pay royalties in exchange for opening them.

– On 9/1/2021 AD, a number of recruiters assaulted a Kurdish elderly man, “Muhammad Darwish Maho, nicknamed (Titi) / 70 years old”, from the village of “Bekeh” – Bulbul with severe beatings, which resulted in bruises on his body and face and a long wound in his head, while shepherding his flock in his olive field, and asking those -recruiters- to return his electric saw, which they stole in front of his eyes.

= Chaos, disorder and bombing of Afrin:

– On August 29, 2021, clashes took place between the militias of the “Sultan Murad Division” and the “Military Police” in the center of Bulbul district, resulting in injuries between the two parties.

– At 6:00 pm on Monday, August 30, 2021, eight rockets fell on the city of Afrin and its outskirts, fired from the direction of the Syrian army and the Russian influence, causing six injuries and material damage to a residential building.

– On 9/1/2021 AD, clashes took place between the remnants of the “Al-Ghab Brigade” militia, led by the so-called Mu’taz Al-Abdullah, who were expelled from the “Al-Hamzat Division” militia and other groups of the division, in the villages of “Faqira, Cholaqa, Gazeh, Gonde Mazen, Marateh, Dargereh, Joqeh”, due to the dispute over the loot and the seizure of homes and property of the people, amid the people’s intimidation.

– On 3/9/2021 AD, heavily armed groups of the “Syrian Front” militia took control of the villages of “Joqeh, Dargereh”, after expelling the fighting “Hamzat” groups from them, to expand their influence in Maabatli district, which witnessed a military alert two days ago, on Background to the permanent conflict between the various militias of the so-called “Syrian National Army” linked to the Syrian-Brotherhood coalition and loyal to Turkey.

In the late summer, the series of burning forests in Afrin (which has been exterminated since the invasion of the region), has not stopped yet, the “Civil Defense in Afrin” reported that its teams had put out on August 29, 2021 a fire in the forest areas in the village of “Qastal”, as well as on 3/9/2021, fires in forests near the villages of “Kafar Janneh – Shara, Basuta – Sherawa, Khalta”. – Jenderes”, as the area of ​​the latter is estimated at /2/ hectares; After the fires are over, as usual, the rest of the trees are cut down by the recruiters, the armed men and their leaders, for firewood, under the pretext that they have become dry.

As long as the militias of the “Syrian National Army” live in the reality of humiliation, subordination and mercenary with Turkey, it is natural for them to fight over looted and spheres of influence, and continue to violate and commit crimes, and spread terror and terror among civilians.

– The hill and shrine of Barbaoush “Berbeʼûş” before and after excavation and digging.

– An earthen berm in front of one of the roads leading to the orchards and fields of the village of “Burj Abdalo” – Sherawa.

– The elderly person with a body injury, “Muhammad Darwish Maho”. 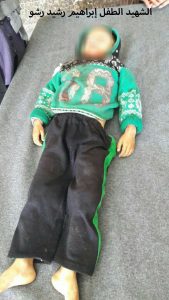 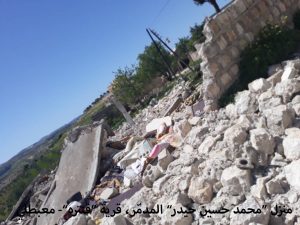 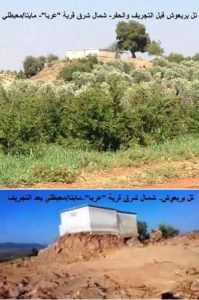 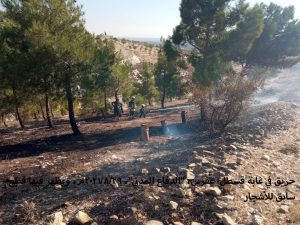 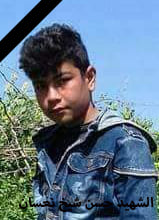 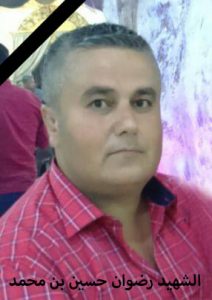 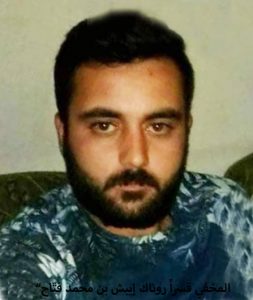 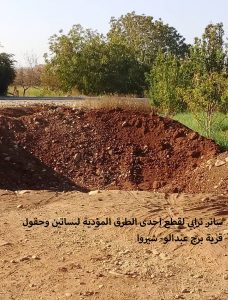 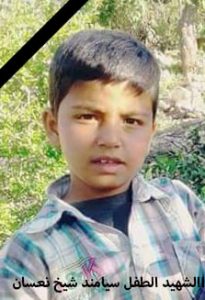 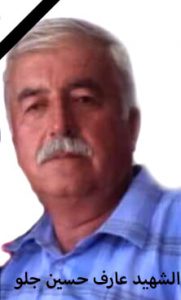 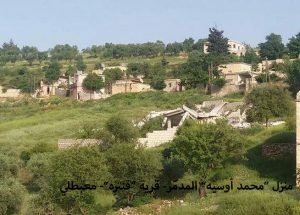 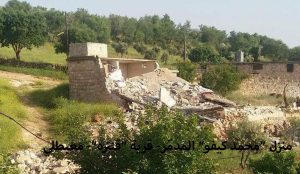 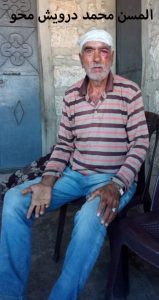 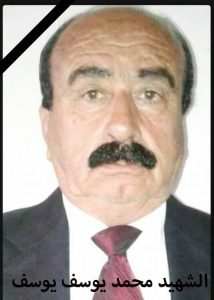 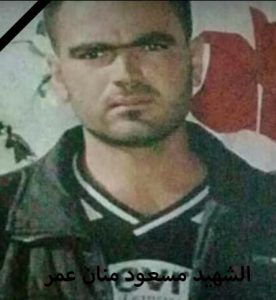 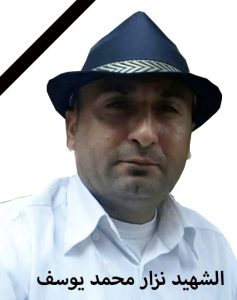