“Muhammad Al-Jassem, Saif Abu Bakr, Fahim Issa, Fadlallah Al-Hajji, Salil Al-Khalidi, Abdullah Halawa, Yasser Abdel-Rahim, Hassan Khairiya, Muhammad Hamadeen…etc.” and their militias called the “Syrian National Army” affiliated with the Syrian-Brotherhood coalition and loyalists For Turkey, they are no different from “Hatim Abu Shakra” and “Ahrar al-Sharqiya” in committing war crimes and crimes against humanity on a large scale, especially in the occupied Afrin region since the aggression on it on January 20, 2018.

Below we review some of them:

It belongs to Shara / Sharran district, about 20 km north of Afrin, consisting of 60 houses, and there were about 225 original Kurdish residents, and /120 families = 600 people/ from the recruiters have been resettled there.

During the aggression on the area /3/ houses for citizens “Mahmoud Khalil Hussain, Nabi Yusuf Hussain, Muhammad Yusuf Hussain” were completely destroyed and /12/ houses were partially destroyed, and during their control of the village, the militia of the “Malekshah Division” stole copper pots, TV screens, gas cylinders and electrical power supplies from all homes, and later all the contents of the homes of the forcibly displaced were stolen, as well as / 25 / electric generating sets, and all the equipment of the public drinking water pumping station, which is out of service until now, and / 4 / agricultural tractors that were restored by their owners after paying fees, two cars that were parked in two houses as a trust, /5/motorcycles, /7/irrigation water pumps, complete car wash equipment for “Rami Muhammad Bahri”, all the cables and transistors of the entire electricity network and its wooden poles outside the village, landline telephone cables, and electrical generating set equipment (amperes) for Kamal Abdel Samad.

And the militias that took the house of “Muhammad Nour Khalil” as their military headquarters impose a royalty of 50%/ on the production of olive seasons for the property of absent citizens and 15%/ on the property of those present, not to mention the extensive thefts that affect olives, sumac seasons, and vineyards

It takes over the State olive press building and transformed it into a stable for sheep and cows that graze unjustly among the agricultural fields, and the mill building of “Abdul Samad Ibrahim” to accommodate the recruits in it, and transformed the farm “Sheikho Muhammad Ali” to a commercial center for storing and selling firewood from cutting down forests and trees.

And the militias exterminated the forest of mount “brotherhood, and Amanos” restaurants, overlooking the Maydanki Lake” – west of the village, by cutting down its entire forest trees, that artificial forest planted since 1960 AD, which its area is estimated at /35 / hectares, and it contained conifers, oaks and hawthorn; It also worked on excavating and digging the shrine of the “Qarah Jurneh – Martyr Hoger”, burning a perennial tree in it, and sabotaging some of the graves of the village.

The residents of the village were also subjected to various violations, including arresting of some of their sons, such as the citizen “Muhammad Horo son of Kamal / 30 / years”, who was forcibly disappeared since April 2018, for a period of two years and eight months, until his release at the beginning of this year.

It is considered one of the large mountainous villages, affiliated to Bulbul district and 10 km away from its center, consisting of /300/ houses, and there were about /1200/ original Kurdish inhabitants, only /200 families = 600 people/ remained in the village due to forced displacement, and /175 families = 900 people/ of recruiters were resettled there, most of whom are from the city of Aleppo and its countryside.

The “Al-Hamza Division” militias control the village, and the Turkish military police take the farm of the citizen “Ali Beg” as their headquarters, and during the aggression on the area, five houses in the village were completely destroyed belonging to “Hisham Khalil, Khaled Khalil Hasso, Yaqoub Muhammad, Idris Hassan, Golin Bilal Hammou”, in addition to the destruction of the municipality building.

The homes of the forcibly displaced were looted and pillaged before the return of the remaining families, as the militias stole the contents of the houses from copper and glass utensils and supplies, and most of the cables and poles of the public electricity network, electric-solar energy equipment, agricultural tractors and pickup cars, including a tractor for “Ahmed Majid”, and some Citizens had to pay a ransom to get their stolen vehicles back.

The returnees to the village were subjected to various types of violations and crimes, including arrest, humiliation, kidnapping and extortion to push them to migrate out of the area.

Two days after they entered the village – mid-March 2018, this militia killed Bilal Muhammad Hamo, 70, with a knife in his house where he was living alone, and his body remained for four days behind the door of the room, until his brother saw him when he visited the house, and some people buried him later.

There is also overgrazing of livestock among the agricultural fields, in addition to the royalties imposed by the militias, which are estimated at 50%/ on the seasons of absentees’ properties and 10%-15%/ on the seasons of olives and grapes for the remaining in the village, and they cut down the forest trees in the mountain Overlooking the village as well as the fruit trees.

– In the afternoon of 7/22/2021 AD, the citizen “Hamid Adnan Hamid / 37 years old” from the village of “Simalka” – Mabata / Maabatli, while he was going to the city of Afrin, he was attacked by the “political – city entrance checkpoint” militia, and he is still detained.

– On 7/23/2021 AD, the citizen “Abdul Raouf Sheikh Sidi / 50 years old” from the village of “Shekhkhotka” – Mabata / Maabatli, was arrested by the Elite Army militia, and he was released on 27/7/2021 AD, in exchange for a ransom although he was village headman and cooperating with the authorities.

– On 24/7/2021 AD, the citizen “Imad Marwan Arab” from the village of “Kureh” – Bulbul, after his cell phone was confiscated, while he was in the market of Rajo town, by the Turkish intelligence, and his fate is still unknown.

– On 7/26/2021 AD, the two young men, “Khaled Hussein Mustafa and Rami Omar Qara”, from the village of “Mosaku” – Raju, were accused by the militias of the “civil police” and Turkish intelligence, on charges of having a relationship with the former Autonomous Administration.

– On 27/7/2021 AD, the citizens “Abidin Omar Aslan 55 years old and his son Nihad Aslan Bayram 45 years old from the village of “Shorba” – Mabata / Maabatli, were accused by the “political” militias in Afrin, on charges of going out in Guard shifts.

– On 7/28/2021 AD, citizens “Ahmed Rashid Hussein, Aslan Sheikhmus Habash” from the village of “Kila” – Bulbul, were attacked by the militia of the “Civil Police in Raju”, after their homes were searched.

– On 7/28/2021 AD, the citizen “Muhammad Ali Ma’mo, nicknamed Souz” and the mayor of the village of “Jobana” – Raju, was killed by the “Raju Civil Police” militia, who handed the seal over the day before his arrest, and was released the next day.

– On 24/7/2021 AD, a fire was set in a forest near the village of “Gazeh” – Afrin, and the “Civil Defense” reported that his teams extinguished it, and the losses were estimated at “75” forest trees, and it is clear in the photo that the previous cutting of trees.

– On 7/26/2021 AD, a fire was set in a forest between the villages of “Jelbereh” and “Maryamin” – Sherawa, and the Civil Defense reported that its teams put it out and that it encountered difficulties in doing so.

– On 27/7/2021 AD, a fire was set in one of the forests near the village of “Kfardaleh Fawqani” – Jenderes, and the Civil Defense reported that its teams put it out and the affected area reached 1/km2, noting that the forest had previously been subjected to excessive cutting by Militia fighters.

– During the aggression on the village of “Tal Salur” – Jenderes, /8/ of the Kurdish fighters fell as martyrs in defense of it, while controlling it, the “Ahrar al-Sham” militia collected their bodies near the “Abu Rafi” villa, east of the hill, to remain exposed until it disintegrated, a month passed, and at the insistence of the residents, they were allowed to move the body parts and put them in an old waterwheel to the east of the village and fill them with dirt, without regular burial procedures.

– On 7/25/2021 AD, the militia of the “Malekshah Division” seized the house of the elderly “Jalal Abdullah” from the village of “Khirabeh Shara” and stole all its contents, after he was forced to migrate out of the region, as a result of the pressures that were put on him, and against the background of a dispute between him and his blind brother “Mustafa”, both of them were living alone in the house.

– The militias of the “Sultan Murad Division” recently informed the people of the villages that they control in Bulbul district to cancel all the agencies under which a part of the absentee indigenous people’s property is managed, where in the village of “Kutana”, through the Mukhtar and two other people, she forcibly inferred the exact places of the properties of the absent and the deceased, whose children were not present, and painted the tree trunks, to remove the agents’ hands from them and seize them.

– On 7/25/2021 AD, six rocket shells fell on the city of Afrin, one of which targeted a headquarters of the “White Helmets – Civil Defense”, which led to material damage to some buildings and vehicles, and 8 people were injured, according to the Civil Defense.

– On the same day, the Turkish occupation forces bombed the town of “Ahrazeh / Ahras” – north of Aleppo, which is crowded with displaced people from Afrin, injuring the citizen “Haitham Hassan son of Omar / 32 years old” and his son “Omar 6 / years old” from the people of “Maydana” – Raju and the minor “Ahmed Zaki” from the “Ahras” family, with varying injuries.

– Since the first days of Eid al-Adha, there has been tension within the militias of the “Al-Hamza Division” in the village of Kafar Shileh and Marateh and their surroundings, due to the rebellion of “Moataz Al-Abdullah, the leader of the Al-Ghab Brigade”, who was relieved of his duties by the division on 24/7/2021 AD, due to the dispute over Influence, money and looted property, as the division brought in a large force and removed the brigade’s barriers and headquarters in those villages on Thursday 7/29, 2021 AD.

– In the afternoon of 7/26/2021 AD, an armed group arrested the citizen “Barzani Ahmed Hamdoush / 20 / years” from the people of the village of “Gamrukeh” – Mabata / Maabatli, while he was traveling on his motorcycle from the city of Afrin through one of the sub-roads near the junction of the village of “Joqeh”, and stole his bike and his phone, and they hit him with the buts of the weapons and left him; Since a while ago, other similar incidents occurred in that location controlled by the “Hamza Division” militia.

– On the evening of 27/7/2021 AD, thieves stole the pump of an artesian well from an agricultural field (100 cherry trees, some walnut trees, sumac, grape bushes and an orchard of greenery) belonging to the citizen “Shaban Othman” -forcibly displaced- from the people of the village of “Zarka – Raju “, which is controlled by the Elite Corps militia.

– On 28/7/2021 AD, a quarrel and live bullets were fired in the Mahmudiya neighborhood in Afrin city, due to a dispute over a car, which led to the killing of a person (a member of the military police in Jarabulus) recruited from the Damascus countryside and the injury of two others.

Based on thousands of published facts and reports about violations and crimes committed in Afrin, and if the US administration is serious about punishing criminals in the Syrian arena, the list of leaders of Ankara’s mercenaries is full of names and formations that deserve severe punishment, such as “Abu Chakra” and his gang.

– The shrine of “Qarah Jorneh – Martyr Hoger” before and after the sabotage by the militias, and “Abu Drama shrine” was written on its room.

– A group of “Al-Hamza Division” militias invaded the village of “Khulalka” – Bulbul, March 2018. 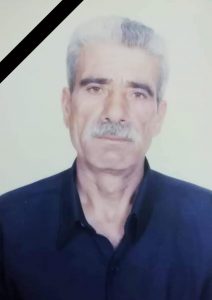 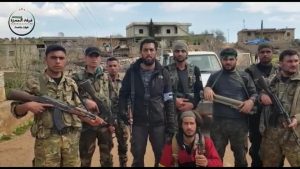 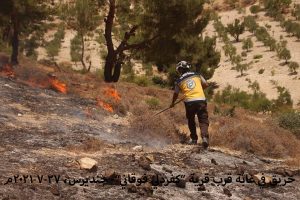 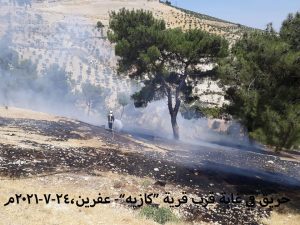 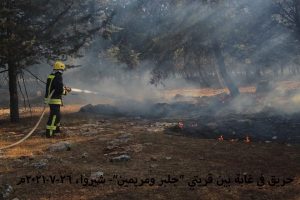