The villages of “Kutana, Alemdara” under violations, deliberate fires of forests and trees, detonation of a car bomb

Any observer does not need much trouble to be sure of the extent of the hostility of the Turkish regime headed by Erdogan to the Kurds and their regions, as the diversity and scale of violations and crimes committed against them in the occupied region of Afrin confirm this, of which we mention:

It belongs to Bulbul district, 30 km north of Afrin city and consists of about 350 houses, before the occupation, it had about 1,400 indigenous Kurdish residents, of whom only 140 families -420 people, remained- While approximately / 1500 / recruits settled there; During the war, it was bombed several times, and /5/ houses were completely destroyed, belonging to the citizens “Ibrahim Garhaja, Muhammad Rashid, Manan Hamid Khoja, Muhammad Bilal, Khalil Manan” and /10/ houses were partially destroyed; During the stationing of the militias of the “Sultan Murad, Al-Mu’tasim Billah Division” in the village, the contents of all the houses were stolen, including supplies, tools, equipment, gas cylinders, copper utensils, etc…, the doors of some of them, the mourning tent, carpets and accessories for the mosque, and an amount of concrete formwork wood, about /8.5/ tons of reinforcing iron and/ 600/ bags of cement for “Abdul Rahman Horo”, contents of /3/ sewing workshops, two cars for “Mustafa Aref, Amir Rashid”, and all cables, poles and accessories for the public electricity and landline networks, and cables and equipment for the internet network belonging to the citizen “Mustafa Hori”; It seized most of the shops, the “Mustafa Aref” mill building, and nearly two hundred homes, including three belonging to the citizens (Ramzi Ibo, Muhammad Manan, Bahri Rasho) that were not handed over to them despite their return to the village since March 2018 AD and their families staying with their relatives, even the Grievances Committee, which visited the village, did not force the settlers to hand over the three houses to their owners.

It also seized about 35 thousand olive trees and imposed a royalty of 15 percent on the production of existing citizens from the olive, sumac and other seasons.

The entire public drinking water pumping set belonging to the village network was stolen, and another set was later installed and water was sold by tankers by the so-called “Fadi Deiri”, the leader of the “Sultan Murad” militia in the village.

As for the gas station in the village, it is invested by the brother of a captain with “Sultan Murad” while its owner, Zuhair Rasho, works for him with a low percentage of the profits, with the seizure of the car wash and the children of the late “Bayan Hori” are forced to involve people linked to the occupation in the work of their automated bakery.

The militias of Sultan Murad seized the buildings of the “Agricultural guiding building, the Municipality, and Olive Press belonging to Manan Rasho Aliko” and turned them into their military headquarters, as Al-Mu’tasim’s militia has taken the house of lawyer “Nazmi Ibo” as its headquarters.

The militias unfairly cut down about 300 olive trees belonging to “Sido Julaq, the Horo family, Mustafa Aref and others”, and cut down about a hundred almond trees belonging to “Amir Rashid Julaq” in Mount Qazindepê, and also cut 90% of the trees in the “drinking water well” forest at the entrance to the village, and the entire forest of (Pirê Sêling opposite the Village of Koleh junction, Alush land east of Kotana, Markhi Chichkleh east of Kutana, Akiliya and Markhi Sheikhmos next to the Islamic shrine of “Qemê” north-east of the village that was excavated and dig it up).

The militias continue to search for antiquities using detectors. They dug in the “Haskieh mountain” site and stole some antiquities from it. They also vandalized some of the graves in the village cemetery, and the name of the village was changed to “Dhafer Obasi”.

The original residents of the village were subjected to various types of violations and crimes, including the martyrdom of the child “Reber Yusef Zakaria Aliko” and Mrs. “Shahinaz Rasho, the wife of Hozan Zakaria Aliko” in the massacre of Mahmoudiya neighborhood in Afrin on March 16, 2018, as a result of the bombing of convoys of civilians fleeing the city with Turkish planes.

As well as the arrest of some of their sons on trumped-up charges and the imposition of fines on them, including the citizen. – “Hassan Adnan Ibrahim / 25 years old”, was arrested in March 2018 and forcibly hidden in the notorious Al-Ra’i prison until the beginning of this year, when he was transferred to Marateh prison in Afrin and detained there more than three months ago until he was released a month ago with a fine of 3 / thousand Turkish liras.

It belongs to Rajo district and is 12 km north of its center.

It consists of 53 houses, in which there were about 225 original Kurdish residents, of whom only 35 remained, and about 400 people were settled in it. /3/ houses were partially damaged during the war; And during the “Al-Sham Legion” militia’s control of the village, the contents of all the houses were stolen from supplies, mattresses, tools, equipment, copper utensils, gas cylinders and the doors of some of them, and two agricultural tractors belonging to the citizens “Muhammad Ezz El-Din, Jamil Othman”, and /5/ cars belonging to “Ahmed Khalil, the two brothers” Ramzy and Salah Hajj Rashid, Ibrahim Muhammad, Khaled Taher, /4/ irrigation water pumping sets, an amount of concrete formwork wood, /6/ Glasshouses and their equipment belonging to the citizen “Ismat Muhammad”, cables and a section of the public electricity network poles, and all the contents of the mosque include the necessities of washing the dead, the mourning tent and its accessories, carpets, audio equipment, books, and the main door.

The militias have taken /3/ houses belonging to “Mohammed Izz al-Din, Rajab Sheikho, Muhammad Khatieh” as military headquarters, and two years ago they took over an olive press belonging to the citizen, “Amjad Sheikh Muhammad,” who was forcibly displaced due to the pressures that were put on him, and they impose a royalty/30- 40%/ of the seasonal production of absentee citizens’ properties (olive, vineyards, cherries, sumac…).

The militias brought in about 30 vehicles and a sawmill, and opened stone quarries within the agricultural lands at the entrance to the village, and they produced and exported alabaster slabs.

Sheep breeders and shepherds graze about a thousand heads in the fields and lands, causing severe damage to the crops, and the thefts of armed men are widespread throughout all seasons, and no one dares to file any complaint to avoid abuse.

Given the significant damage caused to the vegetation cover, forests and trees of all kinds in Afrin region since its occupation in the first quarter of 2018, whether by quarrying or cutting for firewood and the coal industry, or by setting fire to them, by the militias and some of the recruits and under the eyes of the occupation authorities… confirms the deliberate intent to harm the region and its indigenous people and loot or squander property from forests and trees, that is, to strike the relationship of the Kurdish person in Afrin with his natural environment and property, thus destabilizing and weakening the roots of society, which constitutes a crime against humanity; As the size of forest fires during each year of the occupation is double those that occurred in each year of the previous Autonomous Administration rule or from the rule of the former Syrian regime, as the “Civil Defense in Afrin” confirmed that on May 22, 2021 the fire devoured one hundred forest trees near the village of “Barafa / Bazan” – Sharran and on its outbreak in agricultural land in Sharan, and fires broke out in the forests north of “Hajj Hasna” – the triangle located between the areas of “Shiye / Sheikh Al Hadid, Mabata / Maabatli, Jenderes” on 5/26 / 2021 AD, and the “Civil Defense” stressed that its workers – with modest capabilities – were unable to extinguish the fire for two days “due to the roughness of the area and the speed of the wind” and worked to “isolate the fire in several points with simple tools” and that the affected area is estimated at more than /20/ hectares.

This is without Turkey providing any aid or taking measures to put out these fires, although its location is only 10 km from the Turkish border – a line of sight, knowing that Turkey was helping Syria before 2011 in protecting forests on both sides of the border and there were common points Equipped with mechanisms and cadres inside Syria, as well as firefighting by flight.

An eyewitness from the people spoke to us sadly and said: “No pine tree will remain if the militias remain in our area, they never care, our hearts are burning and fires devour our forests before our eyes without us being able to do anything, we look sadly at the rising plumes of smoke.”

– In the village of “Gauandu-Maydana” – Rajo, on May 19, 2021 AD, a group of “Al-Sham Legion” militiamen severely beat the citizen “Sherif Hamid Qanbar / 50” and his wife “Lamia”, while they were harvesting grape leaves outside the village, which resulted in the breaking of the wife’s right hand and the infliction of several bruises on his body; She also expelled the family from their home and stole some of its contents and tampered with the rest, noting that “Sharif” has been subjected to previous attacks.

– On Sunday, May 23, 2021 AD, a quarrel occurred between the militias of the “Al-Hamzat Division”, which controls the village of “Berbeneh” – Rajo, which has an armed checkpoint at its junction, and a group of “Ahrar al-Sharqiya” militias due to the dispute over the investment of the drinking water well in “Geli Tira”, the nearby Nowruz site, the well that the former Autonomous Administration dug and prepared in order to supply the neighboring villages with drinking water by means of tankers.

– On Wednesday afternoon, May 26, 2021 AD, a booby-trapped pick-up truck loaded with medicines was detonated in a side street behind the “Vin” restaurant and in front of a military headquarters known as “The Chechen Headquarters – Sultan Murad Division” – next to the house of the citizen “Mustafa Hito”, in the center of Afrin – Raju Street, which resulted in material damage to shops, buildings and cars, and one of the recruits was killed and nine others were injured, according to the Civil Defense.

In light of the scandals affecting the Turkish regime and the exposure of its criminal record again, the people of Afrin reiterate their appeals to the international community and the governments of Russia and America in particular, to work to end the Turkish occupation and the presence of terrorist militias in their area, in order to avoid further violations and crimes, and to serve a political solution to the Syrian crisis.

– A destroyed house in the village of “Kotana” – Bulbul.

– Shops at the entrance to the village of “Kotana” before and after the invasion, material damage and theft of their contents, and the names of the militia leaders who seized them were signed.

– Shops at the entrance to the village of “Kotana” after the invasion, the doors were opened and the contents were stolen, with the signature of one of the leaders of the “Sultan Murad” militia who seized them.

– The building of the “Manan Rasho Aliko” mill – the village of “Kotana” – a military headquarters for the “Sultan Murad Division” militia.

– Forest fires near the village of “Baarava / Bazan” – Sharran. 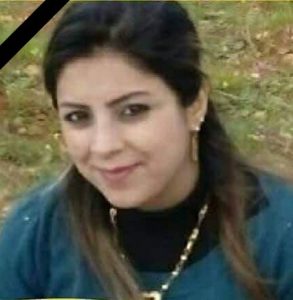 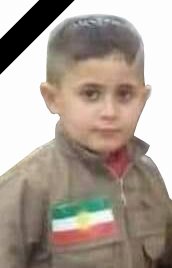 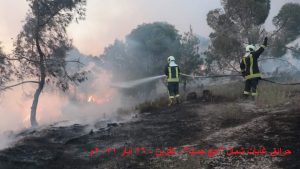 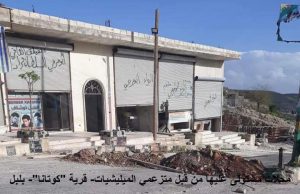 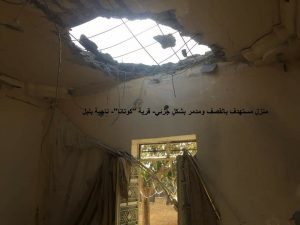 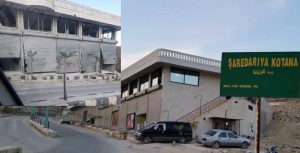 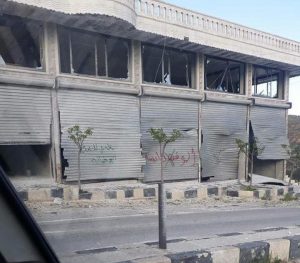 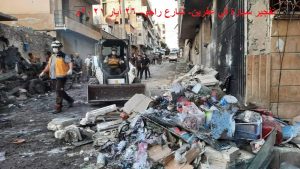