Violations and crimes in “Tal Sallour”, kidnappings, arrests and transfer to Turkey, bombings, clashes and shelling of “Tal Rifaat”, a model of a settlement village

At a time when the occupied Afrin region suffers from a low level of education, the religious movement is witnessing frenzied activity in it by organizations linked to the Turkish Justice and Development Party, the Muslim Brotherhood and the “Diyanet Waqf” directly affiliated with Erdogan, including the opening of the “Imam Khatib” School in Jenderes at the beginning of last March.

Whereas extremist religious activities target children and youth in particular, in addition to the continuing violations and various crimes, including:

It is one of the beautiful villages that border Afrin’s River and is distinguished by its varied fruit orchards, abundant waters and many springs, and it is located 4 km south of Jenderes district and follows it administratively and adjacent to the borders of Idlib governorate from the north, and is considered one of the first tourist villages – in the 1950s and 1960s – in Afrin region ; It consists of about / 80 / houses, nearly half of which are Kurds and the other half from the Arab component (who have inhabited it since the end of the fifties and the beginning of the sixties of the last century, following the application of the agricultural reform law), and its geographical location put it within range of the weapons of extremist Islamic militias (ISIS, Jabhat al-Nusra and its sisters), so since 2012 CE it has been subjected to several attacks with various types of weapons.

Most of its residents abandoned it after its invasion at the beginning of March 2018, and about / 67 / families returned, while the rest were unable to return for fear of Abusing them, as most of the forcibly displaced persons are Kurdish families, about / 40 / families of the recruited people were settled in their homes, and in some of the homes of families existing in the village, or they were kidnapped due so, as well as in separate tents on the outskirts of the village.

The house of “Muhammad Rashid Rasho” was completely destroyed and three other houses were partially destroyed as a result of the bombing, as was the destruction of the villa of the late lawyer, “Riad Al-Yazji”, by detonating it with an explosive device after the invasion, on the pretext that it was the headquarters of the YPJ.

After invading the village and before the return of the people, the militias stole the contents of most homes, especially those belonging to the Kurds, including supplies, copper utensils, electrical appliances, solar energy networks, motorcycles, and several “taxis and pickups” by force in front of the residents’ eyes, as well as breaking glass utensils and household utensils for many houses of the village.

-The martyrs and the wounded in the bombing:

The death of the widow “Sawsan Suleiman daughter of Jamil /45/ years” and the wounding of her minor son, “Muhammad Ali son Esmat,” as well as her niece, as a result of a shell falling on her father’s house in the village, there are three other martyrs who were within the Afrin resistance.

Immediately after the returnees arrived to their homes in March 2018 AD, the militias of Ahrar al-Sham and the Turkish intelligence detained most of them in the mosque, and arrested a number of them (Muhammad Rasho /50/ years old, Asaad Manan / 65 / years old, Azzawi Khuder /60/ years old, Fawzi Kamal) /48/ years old, Rasul Eisho son of Najat /38/ years, Dilshad Muhammad son of Fawzi /17/ years, Ahmed Suleiman son of Muhammad /53/ years, Muhammad Ali son of Adham /53/ years, Samir Muhammad Fayek /32/ years, Rashid Aisho son of Subhi /54/ years, Zainab Fayeq about /30/ years, Jehan Jubri daughter of Ahmed /35/ years, Luqman Muhammad son of Kamal / 38 / years, Hussein Rasho son of Ibrahim /55/ years, children of Muhammad Nur, Muhammad Shehadeh bin Ahmed /25/ years old with the Arabic component ….), they were subjected to torture and interrogation, and most of them were released (some of them after hours, some after several days, and others after months or years), some of them became bedridden patients due to the severity of torture, such as the “Rasoul Aisho” who, after his recovery, was forced to leave with his family from Afrin, fleeing to the city of Hasakeh for fear of repeated arrest, “Muhammad Ali son of Adham” was exiled with one of his wives from Afrin after his release, and his house and car were also seized.

As for “Jehan Ahmed Jubri”, she was sent to Turkish prisons, and her fate is still unknown.

As for “Luqman Muhammad, Samir Muhammad and Muhammad Shehadeh” their fate remained unknown until they were transferred to Marate prison, where they were found that they were forcibly hidden in the notorious Bab al-Ra’i prison, and “Samir Muhammad” was released three months ago and “Muhammad Shehadeh” a month ago, “Luqman Muhammad” has not released yet, and the militias had expelled his family from their home and had settled an armed family there and seized half of the production of an olive field belonging to him.

The citizen “Abdo Mamo son of Bashir /37/ year old” owner of “Bashir Foodstuff Store” – opposite the post office in Afrin city – was kidnapped and detained in harsh conditions for nearly four months by the “Ahrar Al Sharqiya” militia, which handed him over to the Military Police, where he was released there two weeks ago after paying a ransom of 2,500 dollars.

He had been kidnapped once in early November 2018, and he was only released after paying a large ransom.

And the occupation authorities arrested:

– Citizen Hussein Hanan Rashid / 60 / years old, from the village of Haj Khalil – Raju, on 3/26/2021 AD, on the charge of (working in the reconciliation committee during the previous Autonomous Administration), and transferring him from Rajo to Marate prison in Afrin.

– The citizen “Muhammad Mustafa Muhammad /60/ years” -retired from the Electricity Company and from the village of “Chanchali” – Raju- where he fled with his family to Aleppo about three months ago in order to protect his young son and give him a chance to get married, a day after his return via smuggling routes to Afrin he was arrested from his home in Ashrafieh neighborhood, and his fate remains unknown.

– Citizen Hussein Aref Hassan /26/ years old, from the village of Gamroke – Mabata / Mabatli, on 3/24/2021 AD, by the security checkpoint at Qibar village junction – the entrance to Afrin, and he was arrested with / 12 / citizens of Gamroke “on 3/18/2018 AD and forcibly disappeared for / 57 / days in al-Ra’i prison by the occupation authorities.

– Citizens “Rifai Ali Hourou / 40 / years, Khalil Muhammad Sido /60/ years, from the town of Baadina on 3/29/2021 AD, and “Abdeen Sheikhmous Musa / 51 / years” on 1/4/2021 AD on the charge of (participation in night Surveillance during the previous Autonomous Administration for a few hours), and they are still being held in the Military Police prison in the Raju district center.

– The young man “Ibrahim Ismail son of Taj al-Din /22/ years” from the village of “Kokana” – Mabata / Mabatli, on 3/17/2021 AD, by the Turkish intelligence and transferred to Turkey, on charges of the relationship with the Autonomous Administration, where his parents  “Taj El-Din and Fatima” forced to migrate and fleeing to the city of Aleppo for fear of arrest and assault again, because” Taj al-Din “tasted torture during a previous arrest operation, and he is now in a hospital in Aleppo suffering from illness.

– Citizens “Rustum Ali son of Ezzat /35/ years, Emir Jamal son of Jamil /25/ years, Khalil Amir /27/ years, Behzad Othman son of Subhi /50/ years, from the people of Darkereh village, on 3/27/2021 AD, on charges of the relationship with the previous Autonomous Administration, and they were taken to the police station in Mabatli and tortured, then transferred to Marate prison in Afrin.

On the other hand, the Turkish security forces arrested /18/ young men from the village of “Chaqale Jumeh” – Jenderes more than a month ago in the city of Istanbul, while they were together.

The fate of all of them remains unknown. On the other hand, Turkey released the young woman “Rogin Abdo” from the same village a month ago, six months after her arrest in Istanbul.

– On 3/27/2021 AD, bloody clashes took place between the “Special Forces Division” militia and its leader, Abdullah Halawa, who had previously defected from the “Hamzat Division” and is now part of the “Sham Legion”, and militias from Hamzat, in the village of Basuta, which resulted in killing and wounding Elements of them, and the mobilization of both sides in the surrounding villages as well, spreading terror in the houses of the people, and the tension between the two sides continues against the background of the conflict over influence and looters.

– On the night of 3/31/2021 AD, an explosive device exploded in a saloon van in the Mahmudiyah neighborhood in Afrin city, and resulted in material damage.

Clashes also took place between the militia of the “Sultan Murad Division” and a checkpoint of the “Military Police” in the neighborhood, following a dispute over drugs according to local media.

– On Thursday morning 4/1/2021 AD, an explosive device in a “jeep” car exploded in a secondary street in front of the villas in the south of Afrin city seriously injuring one person.

= The bombing of Tal Rifaat:

On the night of 3/31/2021 AD, a group of pro-Turkish militia members sneaked into the town of Tal Rifaat, which is controlled by the Syrian army, from the Mare’a-Azaz side to the north, where they were shaven and disguised as the Syrian army. But after they were exposed and killed, the Turkish occupation forces and its militias targeted the town of Tal Rifaat and its surroundings with dozens of shells until the morning hours, causing great terror among the town’s residents, most of whom were forcibly displaced Afrin, and material damage occurred.

= Four days ago, militias in the town of Meydanki completely cut down / 200 / olive trees belonging to the three brothers, Hosni, Salah, and Nuri Haji Muhammad, in order to collect and steal firewood and deliberately harm the Kurds.

= The “Syrian Forum” headed by Ghassan Hitto, the former president of the Coalition Provisional Government, announced on its website on 4/4/2021 that the Ihsan Relief and Development Foundation headed by Baraa Al-Samoudi had begun implementing a construction project. From / 247 / housing units with an area of / 40 / square meters for the house and a garden of / 60 / square meters for each house in Jenderes district. The project aims to build a model settlement village on a mountain site near the village of Haj Hasna after logging it.

Against the backdrop of Ankara’s attempts to settle a large number of Syrian refugees and displaced persons in the occupied Kurdish areas – northern Syria it is noteworthy that “Al-Forum, Al-Ihssan” are cooperating organizations that have a close relationship with the Turkish authorities and have offices in Turkey.

The Turkish occupation authorities, in addition to practicing hostile policies against the Kurds, did not fulfill their responsibilities to ensure order and public safety, did not create the atmosphere and did not took measures to ensure the voluntary, safe and dignified return of the displaced from the region as a result of the aggression against it in the first quarter of 2018.

-Detonation of a car with an explosive device in a secondary street in front of the villas in the south of Afrin, April 1, 2021 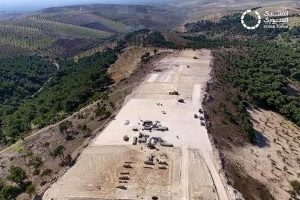 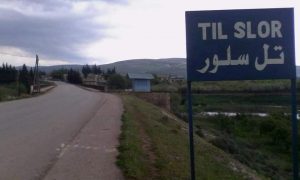 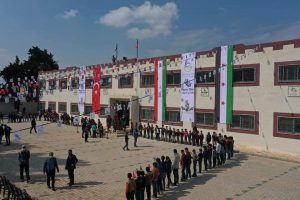 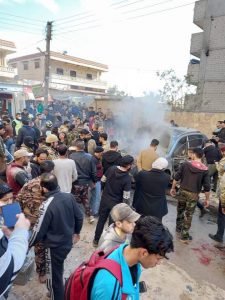