The martyrdom of two citizens, Abuse of the people of “Basuta”, /75/ detainees, bombings and fighting, and villages that have become military barracks.

The so-called “Grievance Redress Committee” formed by some of the leaders and Shari’ahs of the militias, which exercises “the same grievances” in Afrin, admitted to “Enab Baladi” newspaper about its existence, saying, “It has returned many properties to their main owners and issued decisions prohibiting the imposition of taxes on fruit trees, seasons, and grains, and a committee was formed to protect the environment and prevent logging, and overgrazing, but she did not ask why these grave sins occurred?.

Indeed, its “decisions” are just words on paper to the mercenary militia, that has practiced crime in all its forms, and which threatens people with the harshest punishments if they submit complaints to the committee.

The following highlights are some of the violations and chaos prevailing in Afrin:

= Basuta village, and the martyrdom of citizens:

It is a famous village, beautiful by nature, it used to be a popular destination for tourism and summer vacations but has become a gloomy village, an atmosphere of anxiety and criminality looms over it since its occupation by the Turkish army and its mercenaries – March 2018 AD, as the “Hamzat Division” militia controls it and has private and secret headquarters and prisons in (Alahlam Cafeteria, Municipal Building, Villa Arif Mohamed Battal, Telephone Center Building), which witnessed cases of kidnapping and arrests of hundreds of residents of the village and others, who were subjected to various forms of torture and cruel treatment and the imposition of ransoms for their release, under the supervision of Turkish intelligence.

During the aggression, the village and its main roads were targeted by dozens of shells, which led to the partial destruction of a house and the martyrdom and wounding of several of its citizens, including children and women.

When invading the village, the militias stole the contents of most of the homes, including furniture, tools, supplies, photovoltaic equipment, and copper utensils, the doors of some of the houses, as well as stocks of stores and dozens of vehicles, motorcycles and sets of pumping water from wells.

It also seized the fuel station of the citizen “Suleiman Ibo”, Al-Nabaa Cafeteria belonging to the Al-Mukhtar family, which is currently rented for weddings only, tens of thousands of fruit and pomegranate trees belonging to the forcibly displaced citizens, about / 30 / shops in the main street, and / 200 / houses in which about / 300 / families of the recruits have been resettled.

As around / 600 / indigenous families remained, no agency was accepted for anyone. Landline phone cables, poles, and station equipment were also stolen.

And the latest crime was on Tuesday morning 2/23/2021 AD, when the house of the family of the late “Sherif Qassem” in the village of Basuta was exposed to two successive explosions with explosive devices.

a video clip of the second explosion was published, showed its occurrence in an orchestrated manner in terms of filming and launching shouts of Takbeer seconds before it happened, which is what the Islamic militants usually do as an expression of satisfaction and success.

The operation led to the demolition of parts of the house and the death of the girl “Haifa Sharif Qassem 21 years old” and her relative, “Nawzat Akram Topal, 45 years old.” The occupation authorities kept their bodies and arrested their relatives and about 75 Kurds from the village, including about /10/ women, from Among them (Haifa’s mother and sister, Nawzat’s wife and brother Omid, Adnan Ibo, three siblings of Mesto Hussain’s sons, Hajj Khalil. Othman Hanif / 70 / and his son, three sisters of the daughters of Ahmad Khader Duran Omar Ambrush – they have been released). The authorities also torture and pressure the detainees to abuse the village and making false accusations against the detainees, where the village overshadowed by a state of panic, after a security cordon was imposed on “Basuta” and two neighboring villages, “Ghazawiya and Burj Abdalo” by Turkish intelligence, military police and “Hamzat Division” in the presence of its leaders Saif Abu Bakr and Abdullah Halawa, who exempted the security office official in The village, in an attempt to cover up the crime, bearing in mind that the victims were not related to the previous Autonomous Administration or with the Democratic Union Party (PYD), which refutes the story of their employment by the Syrian Democratic Forces and the presence of explosives in the house, rather, “Nawzat” had a commercial relationship with some members of “Hamzat”.

– On the evening of Sunday 21/2/2021 AD, the citizen “Muhammad Muhammad son of Muhammad Suran” from the town of Maydan Akbis was kidnapped from his shop of “installing satellite broadcast receivers” in Afrin, by “Ahrar al-Sharqiya and Sultan Murad” militias, which released him on February 26. / 2021 AD.

– On the morning of Wednesday 24/2/2021 AD, a “van” was detonated with an explosive device in a side street near “Nawroz” roundabout in Afrin city, seriously injuring three members of “Ahrar al-Sharqiya” militia.

– Friday 26/2/2021 AD, the militias of “Sultan Murad, Sultan Suleiman Shah, Hamzat”, the most extreme in loyalty to Turkey, launched a pursuit and raid campaign under the title “Combating smuggling on the Turkish borders.” In coordination with the “military police” established by Turkey in the so-called Euphrates and Afrin Shield, but the militia of the Levantine Front considered that its members, and they themselves, were targeted, so they mobilized their forces and reinforced their barriers at the entrances to Afrin. And Azaz, to prevent any armed force from entering their areas of control, and a convoy of its heavily armed vehicles roamed the streets of Afrin, all this against the background of the struggle over the sphere of influence and the seizure of sources of money-making, as well as spreading terror among people, and under the eyes of the Turkish intelligence, which is mastering the game and stirring up discord among various people. Syrian parties and parties.

– Residents of the villages (Anqale, Sanare, Jenderes) and others under the control of the militia of the “Waqqas Brigade” live as if they are in military barracks, so they are not allowed to leave and enter except under official duties (daily, weekly or monthly) and as for the vehicles (three months) authorized by its security office By claiming to preserve the lives of civilians, according to a statement by “Imad Bakour,” the head of the office in the village of Sanare, in a recently published video clip.

Three shells fell on Thursday evening 2/25/2021 AD, on the city of Afrin, near the former Afrin Hospital, Marathe Roundabout, and near the former Faisal Qaddour School, in which the Turkish army is stationed. Most likely they targeted security and military headquarters.

The successive facts and events three years ago refute the saying of the “safe zone” that the Justice and Development Government and its President Erdogan talked about establishing in Afrin, and the advocates of “revolution and jihad” reveal and confirm this to all. The Syrian National Army militias affiliated with the Syrian Brotherhood are mercenaries and thieves who do not carry any national or humanitarian project.

– Basuta village before the occupation.

– The moment of the bombing of the house of the late Sherif Qassem.

– A “van” was detonated near the “Nawroz” roundabout – Afrin.

– An armed checkpoint of the “Levant Front” militia at the Kafar Janneh – Afrin junction.

– An armed checkpoint of the militia of the “Waqqas Brigade” in the village of “Sanare” – Jenderes. 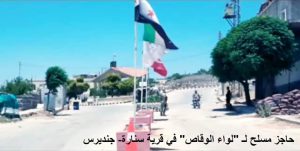 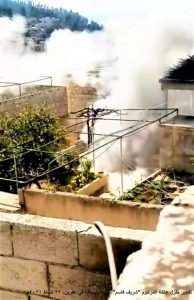 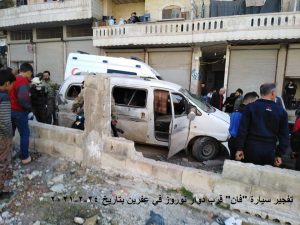 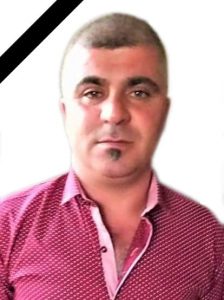 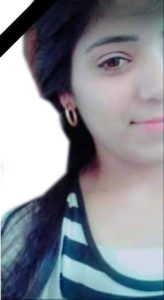 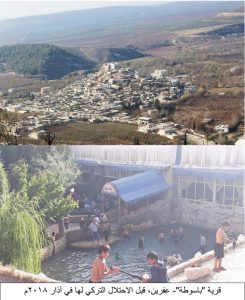