Military alert, massacre in “Tal Rifaat”, resettlement, and violations in the village of “Shengele”, arbitrary arrests

The Government of Justice and Development headed by Erdogan seizes opportunities and exploits arguments and differences between the various parties to the conflict in and on Syria, to pass and implement its hostile policies towards the Kurds in the region in general. It denies their existence and does not recognize any right to them. It persecutes, arrests, deports, kills, and bombs here and there; Perhaps the most prominent images of violations and crimes we are witnessing in Afrin, which is occupied by the Turkish army and its mercenaries from the militias of the Syrian-Brotherhood coalition, including:

= In conjunction with the arrival of the third anniversary of the aggression against the Afrin region on 20/01/2018 AD, Turkish intelligence and armed checkpoints and patrols mobilized in the city of Afrin in particular and intensified their scrutiny and harassment of Kurdish citizens movements, as the Turkish army and its mercenaries on Tuesday and Wednesday 19- 1/20/2021 AD bombarded some villages and towns in the areas of al-Shahba and Shirwa (Tal Rifaat, Maranaz, Shawargha, Alqamiyyah, Malikiyah …) – north of Aleppo, which is crowded with the displaced from Afrin, with dozens of shells.

On the other hand, the Syrian security forces and the army prevent the displaced Afrin in the areas of displacement and the camps – north of Aleppo from moving into Syria, and the crossings are also closed from time to time to the entry of fuel and food trucks to blackmail the Autonomous Administration that manages their affairs despite the Syrian regime’s barriers fees are imposed on entry and exit of goods.

In response to this siege, hundreds of Afrin residents demonstrated in front of the Russian Reconciliation Center in the village of Al-Wahshiya, demanding the opening of the crossings for the entry of goods and materials.

= At exactly two o’clock in the afternoon of January 23-2021, the artillery of the Turkish army and its mercenaries bombed the city of Tal Rifaat and its environs – north of Aleppo, with more than ten shells, four of which landed in the center of the city, one of which hit a house in which a family of its original inhabitants lived; In terms of the result, material damages occurred in homes and / 3 / martyrs were killed (the two children, “Majid Yasser Sakran / 5 / years, Abdul Mohsen Sakran / 12 / years old,” from the residents of Tal Rifat, and the citizen “Nazli Muhammad Mustafa / 55 / years – wife of Adham Muhammad from the village of Semalka – Mabta district “from the displaced people of Afrin) and / 11 / wounded, including children and women.

= Considering chaos and insecurity, on 1/16/2021 AD, two groups of “Army of Islam” and “Alsham Front” militias fought in the village of Turenda, adjacent to the city of Afrin, due to a disagreement about one of the elements communicating with women from the other side, and this led to Military tension between the two parties and spread terror among the people.

= The village of “Shengile” – Bulbul sub-district, close to the Turkish border, consisting of about / 120 / houses, of which only / 51 / families remain, and about / 100 / families of the recruits have been resettled there; The “Hamzat Division” militia and its leader in the village called “Sabri Sakran”, who comes from Azaz area, is practicing various violations,it converted the house of the displaced citizen “Luqman Aouni” – on the main road to its own prison, and confiscated the entire property of / 17 / families of the forcibly displaced “Karshout (Beja)” family, along with other properties.

= On 1/14/2021 AD, the young citizens “Muhammad Ramzi Seydou, Muhammad Ismat Seydou, Sheikh Mus Ahmed Mestkalo” from the village of “Gawonda” – Rajo sub-district, were arrested, as well as the elderly “Muhammad Rush / 75 / years old” from the same village who was released, and the others are still detained by the police in the district center, where the militia leader demands from the family of “Sheikh Mous” to pay a large ransom in exchange for his release.

= On 1/17/2021 AD, the citizen “Mohi Al-Din Muhammad Shaheen / 35 / years” from the village of “Afrazah” – Mabta was arrested, and he was released after two days, on charges of his relationship with the previous Autonomous Administration.

= On Sunday 17/1/2021 AD, a patrol of the “Military and Civil Police”, accompanied by the “Hamzat Division” militia, raided the village of Freire – Jenderes, and arrested several citizens, without being able to document their names.

= On 01/16/2021 AD, the militia of the Alshamiya Front in Mabta / Maabatli again summoned fifteen residents of the village of “Aranda, Mistaka,” who had previously arrested in connection with the car bombing of one of its leaders, despite all the insults and torture they practiced against them without any guilt and they are innocent civilians a ransom was imposed on each of them /5/ tanks of olive oil in exchange for leaving them.

= More than ten days ago, the minor girl “Sherine Rifat Primo / 17 / years” was kidnapped upon her arrival at an armed checkpoint at the entrance to Afrin – Rajo Road, without being able to know the reasons and her fate now.

= On 01/16/2021 AD, Anadolu Agency reported that the Endowments Directorate of the Turkish state of Hatay announced that it had “completed the two projects for the restoration of Omar Bin Al Khattab Mosque and the Tomb of the Prophet Hori in Afrin region,” and that Umit Gökhan Çiçek said, “His directorate attaches great importance to protecting monuments Archeology in Syria “.

This is the opposite of reality, where the site of “Nabi Hori-Syros” was bulldozed, exhumed and stolen many of its monuments, and that shrine – the historical landmark / Q.M / was converted into an Ottoman Islamic landmark, and the minaret and building of the historical “Ibn al-Khattab” mosque in Shiye  / Sheikh of Hadid were rebuilt, which was destroyed due to excavation and search for antiquities beneath it by the militia of “Sultan Suleiman Shah Division – Al-Amshat”; The story of Turkey’s preservation of Afrin’s historical monuments is a big lie, as it was subjected to complete destruction and a comprehensive theft under the supervision of Turkish intelligence three years ago.

Due to the ugliness and indecency of the crimes committed in Afrin, no one can hide them or embellish the face of the Turkish occupation and its mercenaries, and the reality of demographic change on the ground is exposed to the near and far.

– The village of Shengile – Bulbul sub-district before the occupation.

– An injured child in Tal Rifaat.

A destroyed house in Tal Rifaat 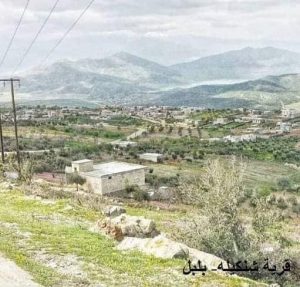 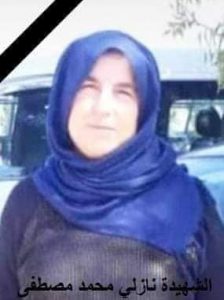 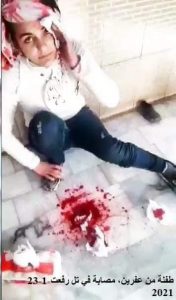 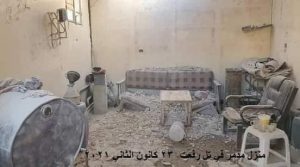