The Turkish occupation authorities, through the terrorist militias loyal to them, as well as the local councils appointed by them, are trying in various ways and methods to pressure the remaining Kurdish population in the Afrin region to push them to migrate and displace, in order to expand and consolidate demographic change in it, by fighting them with their livelihood and drying up their sources of livelihood.

Especially the olive season, which is the main source of their livelihood. It unleashed the militants and most of the recruits by unfairly stealing the current season and before the eyes of the owners, day, and night, and we have observed during the past week some of these thefts and violations:

– The militias (Elite Army, Sultan Murad Division, Northern Hawks Brigade) controlling the following villages in Bulbul sub-district (Qastal Miqdad, Qizilbasha, Kutana, Abla, Kurdo, Shekhutka, Zaitounke, Aboudan, and Bulbul sub-district) imposed taxes estimated at / 600 / SP on each olive tree, whether pregnant or not, on the property of its residents, and sometimes half of the annual harvest is confiscated. The tents of the recruited people are spread among the olive fields in most of those villages, in order to steal, and in some cases the armed men seize the crop after it has been harvested by the owners.

– Around a thousand olive trees were looted by militia gunmen in the vicinity of the town of Baadina, belonging to forcibly displaced citizens, they are (Ali Rashid Ali, Hussein Murad Habash, Mustafa Khalil Shaban, Muhammad Habash Habash, Khalil Abdullah from the village of Damlia).

– The militia of the “Sultan Suleiman Shah Brigade – Al-Amshat” controlling the Shih / Sheikh Al-Hadid sub-district imposed a royalty of 15% on the olive product from the property of the Kurds present, and / 8 / dollars on each olive tree (pregnant or not) from the property of the absentees, except for the seizure of Tens of thousands of trees under the pretext that their owners belong to the Democratic Union Party.

– The “Waqqas Brigade” militia controlling the village of Hajj Qasima-Shih seized / 400 / olive trees belonging to the Usu family, despite the presence of the father and mother in the village.

– Because of the conflict over the looting, the armed men of the “Falconry of the North” militia, on 6/10/2020, fired live bullets at a woman and her two children from the countryside of Hama who were picking olives in one of the fields of the people of the village of Shekhorz – Bulbul, which resulted in severe wounds. One of the Turkish hospitals; As those militias seized most of the property of the villagers, who were forcibly displaced from it and prevented from returning to Afrin.

– As part of the encroachment on the vegetation cover in the Afrin region, the “Samarkand Brigade” militia, which controls the town of Kafr Safra – Jenderes, on the afternoon of Thursday 5/10/2020, set fire to the (Sheikh Muhammad shrine) forest north of the village, which is near the headquarters of the Turkish army, Also in Kharabi Sheikh exa forest, which led to its complete burning, without the authorities and civil defense moving to extinguish it.

– In continuation of its campaign against the people of the village of Qasim-Rajo, on the morning of Monday, October 5, 2020, Turkish intelligence agents, accompanied by military vehicles, accompanied by militia members who controlled the village, raided a number of citizens, under the pretext of their interaction with the previous administration, and they are: Khalil Bakr Bilal, Ahmad Qadir Sido, Hanan Sheikh Barim, Shams al-Din Mustafa Muhammad, Ahmad Hassan Deko, Akmal Hanan Ahmad), then they returned the next day: 10/6/2020 to raid the village, and arrested all of (Batal Deko, Muhammad Shaban Deko Each one of them was forced to pay a fine of / 1000 / LBP in exchange for his release.

– On 8/10/2020, the young Ahmed Ezzat Mustafa, from the village of Damliya – Rajo, was arrested by an armed checkpoint at the entrance to Afrin – Rajo Road, under the pretext of the relationship with the previous Autonomous Administration.

The people of the occupied Afrin region reiterate their appeal to the European Union, the United States of America, the Russian Federation, and all organizations and bodies concerned with human rights and freedom-loving people, to carry out their duties and tasks towards the violations, crimes and inhuman practices they are exposed to in violation of international humanitarian law and international covenants and covenants, and to work to hold the perpetrators and those responsible accountable. On its behalf, led by the Turkish government, forcing it to withdraw from the Afrin region and the rest of the Syrian areas it occupies, and ensuring the safe return of the forcibly displaced to their homes, while ending the presence of terrorist militias, and the return of those areas to Syrian sovereignty and the management of their people.

The village of “Qasim” – Raju. 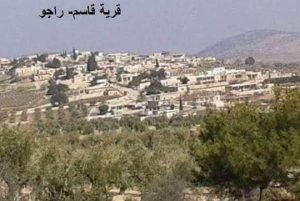